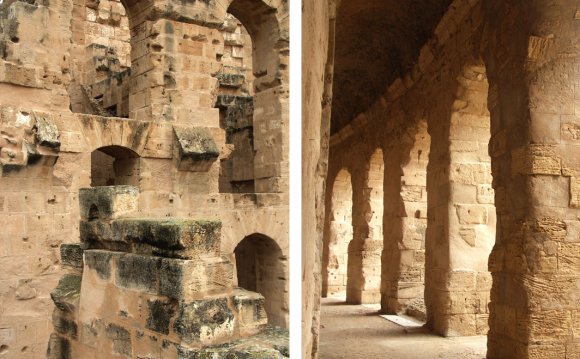 An engineer or artisan must work within the constraints imposed by his materials and skills; these limit his ability to shape, transport and handle materials and finished goods. The growth and stability of Rome was in large part due to the richness of its site and the neighbourhood in a variety of excellent building materials that were available to Roman engineers and artisans. The material varied in quality and over time.

Building stone was quarried as early as 2800 BC The Egyptians quarried soft rocks like limestone, but they also managed harder materials like sandstone, serpentine, basalt and granite (O'Conner, 1993: 51). This was accomplished with wood, stone and bronze tools. O'Conner (1993:51) mentions the Egyptians were able to saw limestone using copper blades fed with sand or set with emery teeth. This technology was passed on to the Romans via the Greeks.

Tufa, or tuff, is a compressed volcanic ash. It is common in Italy and available in three forms - stony (tufa litoide), employed as a building stone; granular (tufa granulare), too soft for building stone but forms the chambers of catacombs; and sandy (pozzolana), used in hydraulic cement (hydraulic cement is a cement that is capable of hardening underwater). O'Conner (1993:51), quoting M.E. Blake, subdivides the building tufas; capellaccio, a widespread, very soft rock that was taken from the first layers of ash that fell near Rome; Fidenae tufa from the second layer; and Grotta Obscura, Monte Verde and Anio tufa from third. The fourth discharge of ash resulted in a layer of stone consisting of hard, dark gray tufa containing fragments of dark lava, white limestone and other materials. This was called peperino, due to its speckled appearance. A similar, but coarser, stone is Gabine stone. The better of these materials for building appear to have been Monte Verde, Anio tufa and peperino.

Tufa was the only stone used during the early prehistoric period of Rome, because it was both near at hand and could be worked with the available bronze tools. Simply removing the covering earth and removing the required material using hammer and chisel was all that was needed. A simple coat of stucco is sufficient to protect it from the weather, and was probably never used externally without this protection (Middleton, 1892a:5).

Lapis Albanus, modern peperino, is a conglomerate of ashes, gravel and other fragments of stone, all cemented together into a dense mass. It is moderately good for outdoor use, and is fireproof. It was used in parts of the Servian wall and at the exit of the Cloaca Maxima (Middleton, 1892a:6).
Lapis Gabinus, also called peperino is similar to Lapis Albanus, but contains less mica, is harder and more weather resistant. It contains broken fragments of lava, the product of some earlier eruption. The Tabularium is faced with Lapis Gabinus, the inner walls are of tufa. In the circuit wall around the Forum of Augustus both the Alban and Gabine stones are used, and the difference in their abilities to withstand weathering can be easily compared. The lower part of the wall is Gabine stone, and is fresh and sharp; while the upper story is of Alban stone and show considerable signs of weathering. Tacitus (Annals, 15.43) tells us that Nero enacted a law that required Gabine stone to be used for fronts of houses in the streets of Rome, because of its fire-resistant properties. This occured after the great fire (Middleton, 1892a:7).

How To Build A Roman Candle Rack