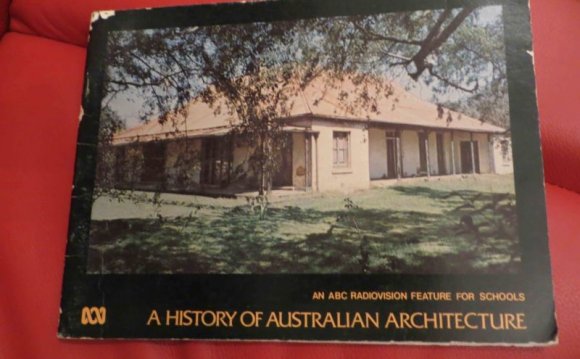 Architects in Australia have created some of the most unusual and outstanding buildings in the world. Internationally recognised Australian icons include buildings like the Sydney Opera House (architect Jørn Utzon) and the new Parliament House in Canberra (architect Romaldo Giurgola).

Distinctive Australian architecture is also recognisable in the rural icons of 'the Queenslander', the 'wool shed' and the 'beach house' which have developed in response to climate, history, place and identity. Characteristically, these designs used local materials as well as corrugated iron and emphasised space and light as well as a connection to the landscape. Architecture ... one word ... countless possibilities. It can delight or disturb, change our lives, and finally outlive us .. So with a leap of faith, we put our trust in the mind of the architect.
Australian Broadcasting Corporation, Program Transcript of episode 1 of Keeping the Faith

Under the dome in the Great Hall, Royal Exhibition Building, Melbourne. Photograph by James Lauritz. Courtesy of Museum Victoria.

Many of the first buildings in Australia were constructions associated with the immediate needs of the colonies. Port Arthur settlement and Point Puer (juvenile prison) were designed by the convict architect Henry Laing. The Round House in Fremantle, built in 1831 as a gaol, was the first permanent building in the colony of Western Australia.

In Sydney, one of the first permanent buildings was Fort Phillip, built by Governor Phillip in 1804 in the area known as The Rocks. Both a military hospital (1815) [later Fort Street School (1850–1974)] and also the Sydney Observatory (1858) were later built on this site.

Early public buildings were constructed around the importance of influencing community and civic identity. There was a sentimental attachment to the idea of public space with a city square ringed by great civic buildings 'to the glory of god and humanity'.

In the founding of the first buildings in Australia, a duality of approaches existed: those which dominated the landscape and those designed to blend in. In 1789 Governor Arthur Phillip placed himself firmly in the first group when he wrote:

... there can be few things more pleasing than the contemplation of order and useful management arising gradually out of tumult and confusion ... by degrees, large spaces are opened, lands formed, lines marked, and a prospect at least of future regularity is clearly discerned.

Convict architect Francis Greenway, from the second group, was responsible for the Macquarie Lighthouse on South Head, the forts at Dawes Point (blended into the folds of the landscape) and Bennelong Point (raised on platforms of local sandstone) as well as the large female factory at Parramatta, Hyde Park barracks, the District Courts and St Matthew's church, Windsor. Hyde Park Barracks is regarded as one of Greenway's best works, and was heritage listed in 2007. The Royal Exhibition Building was constructed in 1880 to house Australia's first international exhibition of cultural, technological, and industrial achievements. The design reflected Melbourne's position as a prosperous city basking in the wealth from the richest gold rush in the world. On 1 July 2004 it became the first building in Australia to achieve World Heritage listing.

The Arts and Crafts movement

Blackwood House. Image courtesy of the State Library of Victoria

The history of technology in education