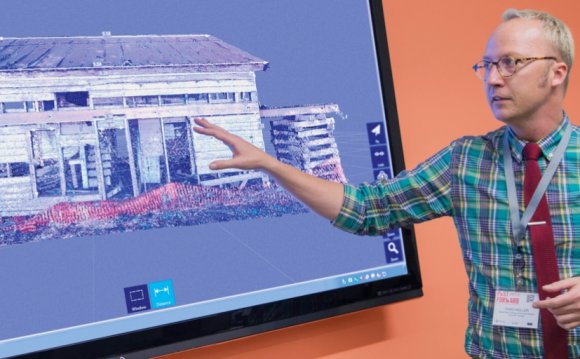 February 10, 2016 | Comments Off on Feature on HP Alumna Celebrates Women in Preservation

Work conducted in the HIPR 712/312 Digital Communication course during the Winter 2012 quarter was highlighted in an article published on the National Trust website.

Over the course of two quarters in 2014, the film The Revolving Fund, which was a CLC project and primarily a collaboration between the film and historic preservation departments, was researched, developed, and created. We have just learned that after two rounds of judging, it won a gold medal in mini-documentary and special achievement in writing in the very prestigious Cinema in Industry (“Cindy”) Awards. The Revolving Fund and SCAD will be listed as a 2015 winner on their website in December. Next, we will be submitting this film to the Cindy Awards’ international competition, and look forward to seeing the results!

Historic preservation students recently received a behind-the-scenes tour of the ongoing adaptive reuse project at the Kehoe Iron Works on East Broughton Street in Savannah. Representatives from New South Construction and Lominack Kolman Smith conducted the tour and described the plans to reinvent the historic foundry as a multi-functional event and concert venue. The complex is a unique collection of historic industrial buildings dating from the late-19th and early 20th-centuries, and their current rehabilitation offered opportunities to discuss topics ranging from sensitive systems integration to graffiti removal from Savannah grey bricks.
Read more

October 13, 2015 | Comments Off on International Conference on Cultural Heritage Thinking

Professor Justin Gunther participated in the “International Conference on Cultural Heritage Thinking: Contemporary Architecture in Heritage Contexts” held in Bogotá, Colombia, on September 2-5, 2015. Organized by Universidad de La Salle’s School of Habitat Sciences, the conference commemorated the university’s 50th anniversary and hosted speakers from Central and South America, Italy, Japan, and the United States. The purpose of this conference was to facilitate an open forum for the examination of intervention criteria, to develop research on new architectural and urban projects located in natural or cultural heritage contexts, and to discuss methods of harmonizing heritage resources with contemporary projects as a way to strengthen community development.

The paper presented by Professor Gunther was entitled “Contemporary Additions to Oglethorpe’s Plan: Managing Preservation and Growth in Savannah’s National Historic Landmark District.” By examining the impacts of recent infill construction on the overall character of Savannah’s historic district, Gunther critiqued the effectiveness of the current design review process and offered suggestions for the future.

August 21, 2015 | Comments Off on Students Develop a Heritage Tourism Report for the City of Savannah

Students in HIPR 720 Heritage Tourism and HIPR 445 Emerging Issues in Historic Preservation collaborated with the City of Savannah and the Metropolitan Planning Commission to research and report upon the current state of heritage tourism offerings in Savannah. The result of this initial study will assist the city with determining which heritage assets are receiving the most attention and which ones are being overlooked in an attempt to present visitors with a more well-rounded experience, and therefore more accurate depiction, in which all cultural heritage assets are being recognized. An inventory of heritage resources and an assessment of their interpretation will assist in providing a more accurate representation of the city’s cultural heritage. Moreover, there is need for a narrative that considers multiple facets of Savannah’s history. This evaluation intends to identify those cultural assets and narratives to assist the city with accurately representing its civic identity. The overarching goal of this report is to lay a foundation which works toward sustainable cultural tourism that is comprehensive, conscious and respectful of Savannah’s heritage assets and its community.
Read more

Both undergraduate and graduate historic preservation students recently submitted a set of HABS measured drawings to the National Park Service as part of the annual Peterson Prize contest. The Peterson Prize is awarded to students who create the best set of documentation drawings completed according to HABS standards. The prize is named in honor of Charles E. Peterson, who founded the HABS program in 1933.

This year, the students documented the historic Carnegie Library located at 527 E. Henry Street in Savannah, GA. Erected in 1914, The Carnegie Library is Savannah’s first African American library and was made possible by a donation from Andrew Carnegie to the Colored Library Association of Savannah. Carnegie did not require his libraries in the southern states to be desegregated, but rather would assist in the building of a “blacks only” library so that everyone in the community had the same opportunities. The Carnegie Library on Henry Street is not only the first African American library in Savannah, but the first freestanding library in the city altogether.
Read more

August 19, 2015 | Comments Off on Students Collaborate with the National Trust and the 1772 Foundation

During the winter 2015 quarter, graduate students in Professor Gunther’s Preservation Economics and Development class, in collaboration with the National Trust for Historic Preservation and 1772 Foundation, conducted an ambitious research project to identify non-profit community development organizations (CDCs) across the country engaged in the rehabilitation of historic buildings.

The National Alliance of Community Economic Development Associations estimates that approximately 4, 600 CDCs exist nationwide. According to community-wealth.org, CDCs produced 96, 000 units of housing and 7.41 million square feet of commercial space in 2010 alone. These organizations are making worthwhile and lasting impacts in their communities, and their efforts often take advantage of older buildings to fulfill affordable housing and economic development needs. Through extensive research and surveying, this study was a first step in quantifying the breadth of CDCs reusing older buildings for community development.

Ultimately, the goal is to strengthen the connections between community redevelopers and historic preservationists to encourage adaptive reuse as a key strategy for community revitalization. The findings of this study serve to eliminate misconceptions and promote dialogue between these two groups. By coupling resources and tools toward a common goal, preservation organizations and CDCs can maximize social and economic impact.

During June the National Park Service sponsored Georgia’s first Preserve America Youth Summit in Savannah. The program asked high school students to investigate issues of preservation and engage in activities that would enable them to contribute their insights and perspectives on Savannah’s diverse cultural heritage and preservation practice.