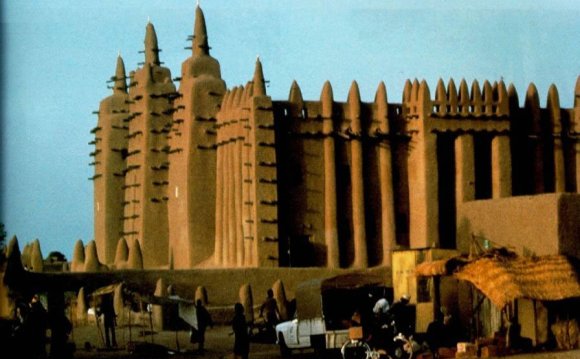 African architecture Djenné, Mosque ofPeter Adams—zefa/Corbisthe architecture of Africa, particularly of sub-Saharan Africa. In North Africa, where Islam and Christianity had a significant influence, predominates among the visual arts. Included here are the magnificent mosques built of mud in Djenné and Mopti in Mali, the rock-hewn churches of Ethiopia, and the Islamic monuments of coastal eastern Africa. Discussions of architecture in sub-Saharan Africa focus chiefly on housing in villages, rural mosques, and the mélange of colonial and modern influences that characterize urban areas. Great Zimbabwe: portion of Great Zimbabwe complex© G. Sioen—IGDA/DeA Picture LibraryOf the buildings of the continent south of the Sahara, the ruins of Great Zimbabwe are perhaps the best known. This complex of stone enclosures, particularly those popularly termed the elliptical building and the acropolis, was built on sites established as early as the 3rd century ce. The first Shona phase of building was probably begun six centuries later and continued until the 15th century, when, under the Mwene Matapa, or “Ravager of the Lands, ” Zimbabwe reached its peak.

Great Zimbabwe: Great Zimbabwe with Great EnclosureZEFAThe architectural forms of , however, are atypical of many African architectural styles. The site has a massive defensive wall and, included in the elliptical building, a conical tower of unknown purpose. It is also monumental in scale, having functioned as a royal citadel, and it has become a national symbol. While some of these features can be found in other examples of African building, they are rare, and the emphasis on Zimbabwe has overshadowed the great diversity of materials, forms, purposes, and uses characteristic of architecture elsewhere in Africa.

The Arab and Amazigh (Berber) architecture of Egypt and North Africa has had an impact on African architecture south of the Sahara. Similarly, the states of the Persian Gulf and the Red Sea have influenced architectural types in Sudan, the Horn of Africa, and the coasts of Kenya and Tanzania, where the Muslim presence has also been strong. These influences are discussed below (see below Influences of Islam and Christianity). African architecture reflects the interaction of environmental factors—such as natural resources, climate, and vegetation—with the economies and population densities of the continent’s various regions. As stone is the most durable of building materials, some ancient stone structures survive, while other materials have succumbed to rain, rot, or termites. Stone-walled kraals from early Sotho and Tswana settlements (South Africa and Botswana) and stone-lined pit circles with sunken kraals for pygmy cattle (Zimbabwe) have been the subject of archaeological study. Stone-corbeled shelters and circular huts with thatched roofs were also recorded in the 20th century among the southern Sotho. Rectangular and circular stone farmhouses, unusual in being two stories, have been built by the Tigre of Eritrea and Sudan for centuries, while in Niger some Tuareg build square houses in stone.

Nigeria: architecture(centre right) Frank WillettSuch exceptions apart, the overwhelming majority of Africa’s thousands of peoples in rural areas build in grasses, wood, and clay. Because of the impermanence of many of these materials, existing buildings, though based on forms many centuries old, are of relatively recent date. Where vegetation is largely confined to thin grazing cover, peoples are often nomadic, using tents of animal skins and woven hair for shelter. In the veld and less-forested areas, grasses are used as building material as well, being employed widely for thatch and mat roof coverings. Hardwoods in forest regions are used for building, as are bamboo and raffia palm. Earth and clay are also major building resources. Characteristic soils of Africa include semidesert chestnut earths and laterites (reddish residuals of rock decay), which are often low in fertility but easily compacted. Earth-sheltered houses are made by the Iraqw of Tanzania, and a number of peoples in Mali and Burkina Faso have partly sunken dwellings.

Ecological and demographic factors play an important part in building design. Soil erosion and overgrazing, as well as pressure on land as a result of population growth, have also contributed to migratory movements. The growth of urban centres led to wide-scale migration in the 20th and 21st centuries, and these migrations have had a profound effect on the dispersal of house types.

As a consequence of their hunting and gathering economy, the San of the Kalahari move frequently. Some San of Benin City, Nigeria. In the 16th and 17th centuries it was as large as a European town, with many courts surrounded by galleried buildings, their pillars encased in bronze plaques. Roofs were shingled, and there were numerous high towers topped with bronze birds. was burned by the British in 1897. The Yoruba of western Nigeria are also an urban people. Their towns traditionally have as their centre the (palace) of the oba, from which radiate broad roads dividing the town into quarters, each with its compound of a subordinate chief. Some afins in the precolonial era were of great size, encompassing much of the surrounding bush; the afin of Oyo, the capital of the Oyo empire (17th and 18th centuries), was reported to cover 640 acres (260 hectares). The palace buildings were substantially built, and the open verandas were supported by carved caryatid pillars. towns still have palaces; though the architecture is often Westernized, traditional courtyards, recreation grounds, and high surrounding walls persist.

The s (“stone houses”) built in the 17th and 18th centuries by the Rozwi kings of southern Central Africa were royal kraals, an example being the citadel of Chief Changamire at Khami, Zimbabwe. Ruins at Regina, Nalatali, and Dhlodhlo (also in Zimbabwe) all display fine mortarless stonemasonry worked with chevron patterns and banded colours. Many African palaces were larger and often better-crafted versions of the traditional dwelling type, raised on hillocks or plinths. Such were the palaces of the kabaka (king) of the kingdom of Buganda, including the great barnlike thatched dome with an open reception veranda at Mengo, near present-day Kampala, Uganda. Other palaces were royal compounds, such as that of the fon (chief) of Bafut, Cameroon, which within a high fenced enclosure contained separate quarters for the older and younger wives, dormitories for the adolescent sons, houses for retainers, stores, meeting places, a shrine house and a medicine house, burial structures for former chiefs, and structures for secret societies.