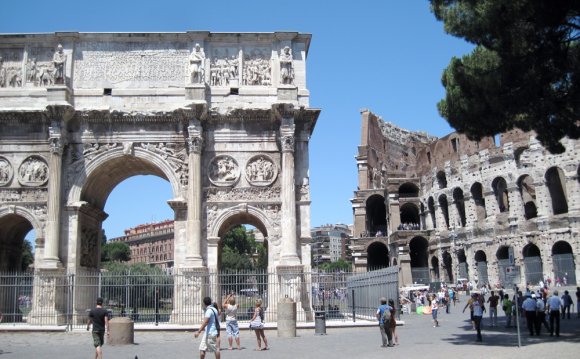 Concrete enabled ancient Romans to think architecturally advanced compared to other civilizations at that time. Concrete allowed the Romans to push the limits of structure from the typical brick and mortar buildings to domes and vaulted ceilings. Many of the concrete structures created by Rome had a very important ingredient called Pozzolana that is volcanic ash found at Pozzuoli near Naples.
Roman concrete gave the Romans an advantage because this allowed them to build structures that were less costly and buildings that did not require internal supports. Prior to the use of Roman concrete, the Romans were used to the typical post and lintel structures of the Greeks and Etruscans. Lintel structures are load-bearing building components that were used to span over two vertical points with limited architectural properties.

Baked Brick
The Romans made fired clay bricks throughout the Ancient Roman Empire to build elaborate buildings. These bricks were made from Roman legions and citizens who operated kilns that were built throughout the empire. Many of the bricks were stamped with the legion's mark that produced the bricks. In the middle of the 1st century BCE, Brick makers used unique stamps that had the name of the brickyard where the bricks were produced. Brick making reached its height of production and quality in the first century. Rome used bricks far and wide; in both the private and public constructions. The Romans took the skilled trade of brick making throughout the empire and even trained locals on how to produce bricks. These bricks ranged in size and shape. Many of the bricks were square, rectangular, triangular, and round; depending on the construction needs. Bricks also varied in size and height and length. Some Roman brick buildings had bricks as big as three feet in length.