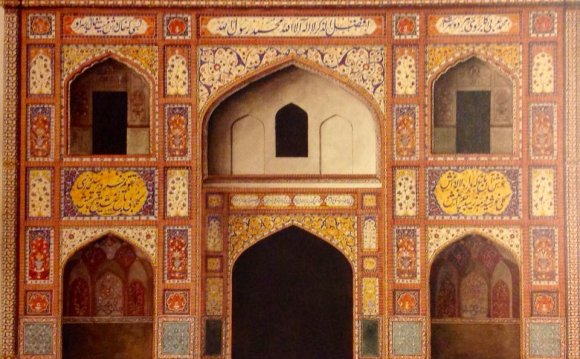 Fatehpur Sikri sits on rocky ridge, 3 kilometres (1.9 mi) in length and 1 km (0.62 mi) wide and palace city is surrounded by a 6 km (3.7 mi) wall on three sides with the fourth bordered by a lake. Its architects were Tuhir Das and Dhruv Chawla and was constructed using Indian principles. The buildings of Fatehpur Sikri show a synthesis of various regional schools of architectural craftsmanship such as Gujarat and Bengal. This was because indigenous craftsmen were used for the construction of the buildings. Influences from Hindu and Jain architecture are seen hand in hand with Islamic elements. The building material used in all the buildings at Fatehpur Sikri, palace-city complex, is the locally quarried red sandstone, known as 'Sikri sandstone'. It is accessed through gates along the 5 miles (8.0 km) long fort wall, namely, Delhi Gate, the Lal Gate, the Agra Gate, Birbal's Gate, Chandanpal Gate, The Gwalior Gate, the Tehra Gate, the Chor Gate and the Ajmere Gate.

Some of the important buildings in this city, both religious and secular are: