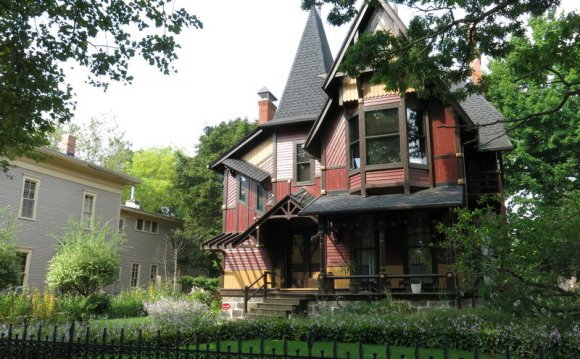 Suppose a spaceship lands on your lawn, visitors from another planet step out and ask you to show them a house. No problem; you point one out. OK, they say, now show us an historic house. So you find one that looks old. And they want to know: what’s the style?

In Kalamazoo, it could be anything from Gothic Revival to Tudor to something of a mashup. A house’s style isn’t always easy to tease out. But in the second of a two-part series, we explain how to get started.

Lynn Houghton knows Kalamazoo’s historic houses. For more than three decades she’s led neighborhood tours where she talks about noteworthy homes. In Stuart, she asks a group about a house in the city’s oldest permanent style.

“Greek Revival!” they call out.

“See, some of you have been on too many of my tours, ” she says.

Greek Revivals were popular in Kalamazoo until the early 1860s. You can hear more about them in the first part of this series. In any case, Greek Revivals tended to be symmetrical – as did the houses of the next style that came to town.

“What do we have here?” she asks in front of another house.

A take on the architecture of Renaissance Italy, Italianate building flourished in Kalamazoo for 20 years – from just before the Civil War to about 1880. Some of the houses are grand. A few even feature a cupola, which looks like a miniature sunroom on top of the house. But most are more modest. Houghton says they’re some of the easiest historic houses to identify.

“And a lot of that is because of its shape. It’s – for the most part the regular Italianate is going to be cubic in shape. And they kept that cubic shape if they made any additions it was to the rear of the house not to break up that cubic shape, ” she says.

The windows on an Italianate house are a giveaway – generally tall and all one size. And if you look up you’ll likely see a cornice – that’s decorative molding - where wall meets roof, sometimes with brackets on the underside.

Even the most decked-out Italianates look subdued compared to homes in the city’s next style. The era of the Queen Anne house lasted from 1880 to the turn of the 20th century.

“Queen Anne styles were built to look very unique. And how they made them unique was the shape of the house, ” she says.

Unlike the Italianates, Queen Anne houses brought all kinds of shapes together in one house. You’ll see them with turrets and windows of all different sizes. And in keeping with the quest for uniqueness, many Queen Anne houses drip with decoration. They’re often painted multiple colors and covered in trim. You’ll see shingles on the side shaped like fish scales – anything but a plain rectangle.

But the over-the-top Queen Annes have some more subtle cousins. These are houses with a few elements of Queen Anne style, but not every sprinkle.

“I call those Princess Anne. And they go all the way down to Baroness and…Lady Anne, ” she says.

“Which means four rooms on each floor. Usually downstairs is a foyer, living room, dining room, kitchen. Upstairs, three bedrooms and a bath. So it’s four-square, and then it usually has a full-length front porch, ” she says.

Ferraro says the foursquare is the most abundant older house in Kalamazoo. Most were built between 1900 and 1920, as demand for housing boomed. Ferraro says that in the moment, builders went with what they thought people wanted and what they could get at the sawmill. They didn’t worry about design purity.

“In the future, we go back and name these styles. But at the time they were just building – ‘a quaint country cottage’ they might call it, or ‘a house in the Greek style’ or an Italian villa is what they were calling it, ” she says.

Terms like “vernacular” and “eclectic” refer to houses whose styles don’t fit in one tradition. Houghton says it can be tough to untangle their influences. That also goes for homes that have been modified. But it doesn’t mean it can’t be done.

She says a librarian can help you find out more.

“If you see a brick foundation that is kind of a soft looking brick as opposed to a hard glazed look to it… that or stones that are about the size of a softball to the size of a football for the foundation are the oldest houses, ” she says.

Sometimes you have to look carefully for that old brick: “Often a brick foundation will be what we call parged – there will be a bit of plaster coating put over it. So you might see a corner that’s broken and underneath you see bricks, ” she says.

The oldest stone foundations are made of whole “field” stone, she says, not stone that’s been cut into blocks. But later, “then you get the wonderful dressed, rectangular cut stone…that goes back to maybe the Civil War and then all the way up into the First World War, that entire period you’d see that kind of stone, ” she says.

“So if you see concrete block foundation then you know it has to be after 1880. Because it just was not available in Kalamazoo until after that point.