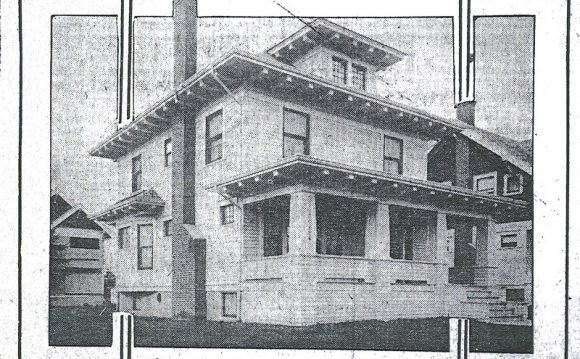 There was a big push by politicians and leaders of industry to upgrade the standard of low cost housing and make homes more affordable. The twenties was part of the transition period between the 19th century style of housing and the type of homes we have today. New materials and building methods meant houses were easier to heat and cool, were more hygienic, and more suited to modern living styles.

A desireable feature of 1920's homes found especially in bungalows was the breakfast nook. It was a compact space-saving eating area located near the kitchen and in smaller homes it replaced the dining room or saved the dining table from taking up lounge room space. Sometimes the seating doubled up as storage chests by making the long seats with a hinged lid.

This modern style of housing was exemplified in an architectural competition in 1921 for small homes where it was specified - "The requirements of the house provide for a home for an American family of good taste, small means, and no servants, desiring to make a charming home with (a) beauty of design obtained by harmony of line, color and proportion, and simplicity of treatment of the house and grounds, (b) the maximum of comfort in summer and winter, (c) the maximum of housekeeping facility and convenience for all phases of indoor and outdoor family home life, and (d) the minimum exterior and interior upkeep and operating expense, and (e) the minimum of cost consistent with a, b, c and d."

Reinforced concrete techniques were developed to the point that precast concrete panels were used in house and church construction as well as commercial buildings. In fact complete houses were built that resembled weatherboard houses in appearance. Reinforced concrete was also used extensively in bridge building.

Twenties homes are sought after today by renovators and restorers who want to update the beautiful character homes with modern fittings and furnishings.

The word skyscraper was originally a nautical term for a tall mast or sail on a sailing ship but today is used to refer to tall buildings, usually higher than 150 metres (500 feet). Most skyscrapers serve as office buildings or hotels.

Until the 19th century, buildings of over six stories were rare. It was impractical to have people walk up so many flights of stairs, and water pressure could only provide running water to about 50 feet (15 m).

The development of steel, reinforced concrete, and water pumps have made possible the construction of extremely tall buildings, some of which are well over 300 metres (987 ft) tall. The other development essential to practical skyscraper development was the invention of the elevator.

The skyscraper first emerged in the land-strapped areas of New York City, New York and Chicago, Illinois toward the end of the 19th century. Engineers of the 1920's considered that 2000 feet high was the maximum height that a skyscraper could be built.