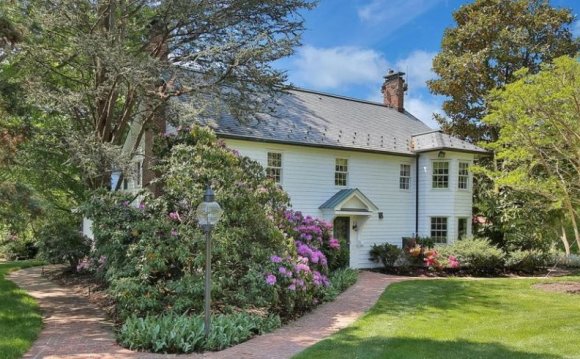 How well do you know your U.S. history? It might have been awhile since your eighth-grade civics class, so we’re giving you a brush up on Colonial events with a real estate twist this Independence Day. From homes of Declaration signers to estates near from Revolutionary battlefields, we’re touring 13 historic homes from the 13 colonies.

Although the first Europeans touched down in Massachusetts, Virginia claims the honor as the first colony. This Urbanna home was built as a tavern more than 100 years after the colony was established. Urbanna was once a significant seaport, and this tavern hosted a number of passing dignitaries, including Patrick Henry, who famously declared “Give me liberty or give me death!” The home of Plymouth Rock and the Pilgrims’ Plymouth Colony, Massachusetts held some of the earliest European settlements. This home — the Hosmer Homestead — is located in Concord, one of the sites of the Revolutionary War’s first battle in 1775. Undoubtedly the residents of the Hosmer Homestead were witnesses to the battle and “the shot heard ’round the world.”

Although a separate colony, New Hampshire was joined to Massachusetts and ruled by one governor for many years leading up to the Revolutionary War. This small state was significant in moving the U.S. toward independence; its ninth vote ratified the Constitution. This 18th-century farm is one of many historic properties in the neighborhood of Taunton Hill in Andover and is a restored Federal-style building. The smallest of the U.S. states was also one of the first colonies to declare itself independent from British rule. The small but mighty state is home to this Cape Cod-style home with 2 bedrooms, 2 bathrooms and attached garage.

Delaware was not only one of the 13 colonies but was also the first state to ratify the U.S. Constitution. This clapboard-shingled house for sale in “The First State” sits across the street from the water and has 4 bedrooms and 2.5 baths in 3, 000 square feet of living space. Fifty-six men signed the Declaration of Independence — some well known, some not quite as recognizable. While you can’t buy Thomas Jefferson’s home, another residence owned by a Declaration signer, the Rev. John Witherspoon, is for sale in New Jersey. The Princeton home was built for him and was completely restored and enlarged by its present owners in 1998.

New York was the site of nearly a third of the Revolutionary War battles. Situated across the Hudson River from the West Point Military Academy, Garrison is home to this barn-turned-modern estate. The 18th-century barn sits on nearly 8 acres of land surrounded by conservation easements.