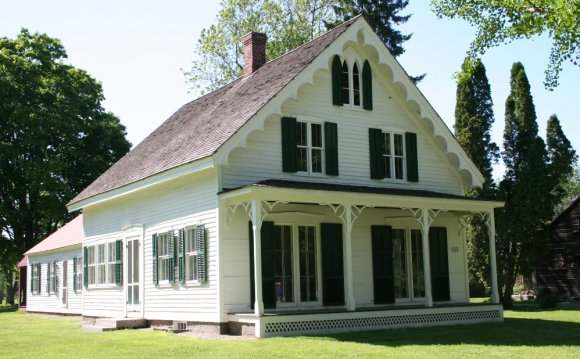 The gable end of this Carpenter Gothic house in central Maine features fancy scroll work and unusual second floor windows the replicate cathedral features. Note how the board and batten siding gives a strong vertical element to the house.

A form Gothic Revival, the Carpenter Gothic style in America grew out of a need for quickly built houses - and the desire for fanciful details. The new balloon framing technique and the invention of steam powered scroll saws, which allowed for the mass production of intricate mouldings, led to a proliferation of pattern books devoted to "country cottages" both here and in England.

These homes weren't intended to be castles or cathedrals, but as English architect John White wrote in his Rural Architecture: Ornamental Cottages and Villas in 1845, "of such a character as to accommodate the various ranks of society, the price being so moderate as to bring it within the reach of the humblest mechanic." In England, the style reflected a resurgence in interest on the Gothic stone structures of the Middle Ages, and Gothic Revival homes and churches were often constructed of brick and stone. In the United States, Yankee ingenuity and an abundance of fine lumber led to the interpretation of details in wood, and the style became known as Carpenter Gothic. While Gothic Revival structures, especially churches and commercial buildings, are found in cities, builders of the day favored pastoral settings with lush lawns for their Carpenter Gothic homes.