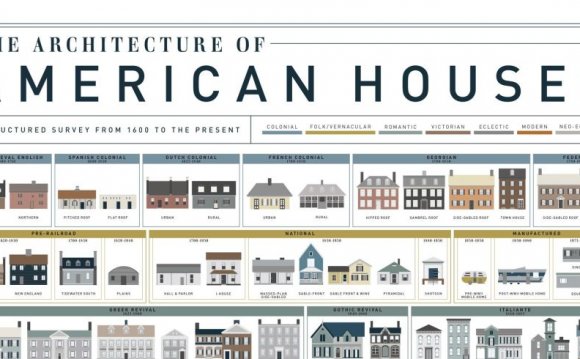 Ski town architecture may be gorgeous, but it's not without its clichés. Behind every subtly-designed timber structure is a 15, 000-square-foot log-cabin monstrosity and Curbed Ski has seen enough Western kitsch to supply a bad Hollywood remake. Even though recent trends in design skew towards more eclectic contemporary architecture, these clichés ensure a certain predictability in the high country. You won't find many Cape Cod-style retreats and there's nary a thatched beach house in sight (thank goodness). As much as we harp on all the antlers, taxidermy, and log-home overload, we'd be nothing without ski country's most revered architecture traditions. So without further ado, may we present the 7 types of high-country homes you're sure to encounter in every ski town.

1. The Victorian: Victorian architecture in ski towns is a holdover of life in the mountains before there was skiing. From the 1850s onward, people flocked to towns like Aspen, Crested Butte, Park City, and Telluride to stake their claims in mining, searching for silver, gold, or whatever precious metal was most prominent. Many of the oldest bars, restaurants, and hotels in ski towns date to the late 19th century, when the Queen Anne style was all the rage and brightly colored, two-story homes were on trend. Today, you can still find original Victorian houses in ski towns across the American West, characterized by their wraparound porches, occasional octagonal towers, and steep, multi-faceted roofs. Because of their history, Victorians are often located in prime locations downtown, so those that survive have often been renovated with additions and modern styling.

2. Austrian, German, and Swiss-Inspired Chalets: Rather blandly designated as the "alpine" style of architecture, North American design has always been influenced by skiing's cultural origins in Europe. Whether with a decorated gable-end or multiple balconies complete with flower planters, from the 1930s onward ski resorts and towns wanted to transport visitors to a "genuine" alpine experience. The trend gained traction when architects in the 1960s in Vail, Colorado and Stratton, Vermont envisioned the newly opened resorts as compact mini-European villages with lodging, restaurants, and shopping. Through Bavarian painted shutters, Tyrolean-style facades, and a whole lot of Disneyland-esque kitsch, ski country became littered with a whitewashed European aesthetic that was part Austrian, part Swiss, and all American bravado.

3. The A-Frame: Perhaps the most iconic American ski house, the A-frame's golden age coincided with the proliferation of ski areas in the 1950s and 1960s. Cheap, easy to construct, and built for lounging on their outdoor decks, the A-frame was part treehouse and part funky teepee. A-frames can come in any size, from big to large, but the equilateral triangle-design was known for its full-height living areas, cozy sleeping lofts, and bathrooms and utilities in the basement. Popularity peaked in the late 1960s and early 1970s, when backlash over mountain sprawl started to curb what once appeared to be an insatiable desire for the quirky structures. Today, the A-frame is a relic of a ski past often mourned and never replicated: when skiing was affordable, the dream of having a mountain vacation home seemed within reach, and the mega-mansions of the future had yet to be built.

4. Geodesic Domes: Although rarer than A-Frames, geodesic kit-houses are minimalist at best. They flourished with the counterculture of the 1960s and 1970s and became part of the "return to the land" movement. This architecture trend was never a huge part of ski town life, but nearly every high-country hotspot counts at least one or two dome homes in their architectural repertoire. If you're lucky, inside the interlocking triangles you'll find groovy shag carpeting, plenty of wood paneling, and a wood burning stove as centerpiece.

5. Yurts: Yurts are much more common than geodesic domes these days, both as part of the growing tiny home movement and as an easy-to-assemble, easy-to-maintain option for shelter in high-alpine environments. Circular in shape, yurts are usually tent-like structures with a collapsible lattice framework. While you'll find plenty in the backcountry that cater to skiers and snowboarders on hut trips, there are also a surprising number of yurts being lived in full time or used as nightly rentals for vacationers.

6. The Log Cabin: Once a symbol of independence and simplicity, the log cabin was almost extinct until the 1970s when environmentalists' interest in natural materials revitalized the style. The log cabin steadily gained favor in ski towns throughout the 1980s and seemed to take over high country in the 1990s. But gone were the modest, one or two-room cabins of yesteryear; everything about the log cabin since the mid-1980s has been about excess. Today's log cabins are massive, uber-luxurious mansions full of oversized boulders, two-story fireplaces, exaggerated logs, and even streams. When the occasional "small" log cabin appears (i.e. less than 2, 000 square feet), it's the exception rather than the rule.

7. The Contemporary: Today's ski homes blend elements of many architectural styles to create something that is uniquely contemporary. At times houses harken back to the Modernism found in new ski resorts built in the 1950s-1970s when architects looked to glass, geometric forms, and reinforced concrete to innovate design. In other cases, the influences of Frank Lloyd Wright's organic architecture and attempt to merge designs into nature are clear. There's a lack of consensus in 21st-century ski town architecture, except perhaps in what is left out. Contemporary stylings eschew the log-cabin excess so favored in the 1990s, preferring sleek lines over 18-inch logs and indoor/outdoor living areas over massive stone fireplaces. Of course, this doesn't mean that contemporary ski homes aren't large. To be sure, there are excesses in other amenities, including wine rooms, gyms, theaters, and even indoor basketball courts.

So there you have it, Curbediverse, ski country's 7 most prominent architecture styles. Did we miss any? Let us know in the comments.