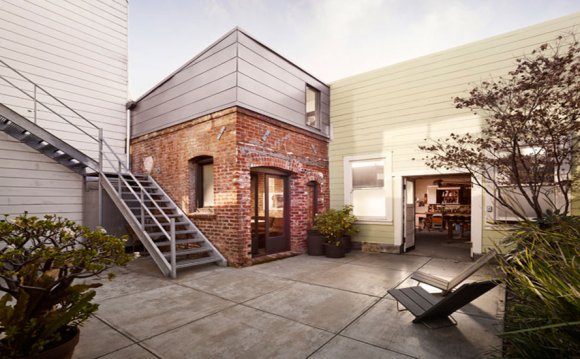 (2007)
by Moore Ruble Yudell
The architects attempted to create an easily identifiable marker within the civic center, and they certainly accomplished that. The striking façade consists of ribbed concrete panels installed in a shifting pattern and tinted channel glass that provides bursts of color and light-play throughout the day and into the night. The first parking structure to achieve LEED certification, the project made use of materials with ample recycled content such as fly-ash replacement for cement and steel — along with photovoltaic panels on the roof to generate a significant portion of the structure’s energy source.

, Utrecht, the Netherlands (2008)
by JHK Architecten
Designed as a pair of volumes connected by crossways, this project consists of offices in one building and garage facilities in the other with a unifying exterior aesthetic: gold-colored, perforated aluminum-composite panels clad both structures (save for the open-air spiral drive ramp). The architects specified the panels with concave arches and in different perforation patterns so that, when installed in a staggered, alternating fashion, the structures have a woven appearance.

, Oklahoma City, United States (2008)
by Elliott + Associates Architects
On the outside, this gleaming white structure sports staggered metal panels that both screen the cars and provide ample ventilation but also match the adjoining office building’s aesthetic.

The actual parking facility, however, holds the visual surprise. Colored lights (a different hue for each level) function as an elegant way-finding tool.

Lighting in stairwell walls and simple painted bands on the inside of trusses sparingly and tastefully reinforce the color-coding.

, Almere, the Netherlands (2010)
by Mei Architects and Planners
From a distance, one can make out that there are reliefs emblazoned in the façade of this structure. Hieroglyphs they are not.

Instead, they are motifs associated with the province such as birds, windmills and garden gnomes. The architects used perforated metal panels that are thermoformed with the images.