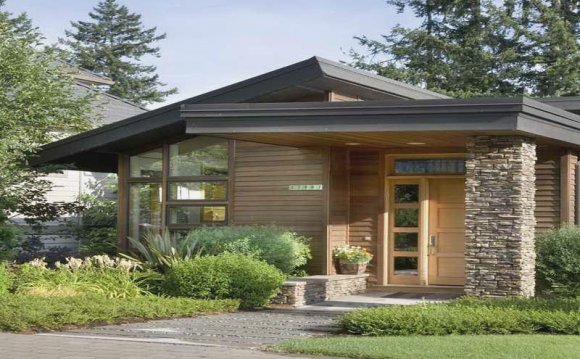 When Paul Vickery and his wife came home from Japan in 2000, they thought they’d like to build something modern and full of light. Tokyo had been full of houses like that, and that’s what they wanted instead of the Thirties house they’d bought up a rutted private road in the Surrey village of East Horsley. Then a local paper ran a story, with a black-and-white photo, about some show houses that had been put up in Cobham. “I just looked at it, ” says Vickery, his voice wry and Scots, “and thought: That is an amazing amount of glass. Let’s go and see it.”

So they did, and they loved what they saw and decided to commission a design and put in the plans. “The planners hated it. They absolutely hated it, ” Vickery laughs. “We frightened the horses.” Of course, Vickery was trying to build the first white Huf Haus in Britain. Grand Designs was yet to have grabbed the nation’s attention with their show about Greta and David Iredale, the then 70-odd year-olds who erected the glass, timber and steel Huf Haus of their dreams — on camera! On time! On budget!

That 2004 show stamped these German kit homes on the British house-lust (and planning) psyche, and since then getting permission has been easier, though Mark Lawson, a developer who’s already built two Huf semis and had to sell one, is battling neighbours as I write. But for Tim Virdee, whose 5, 500 sq ft Huf extravaganza lies up a potholed private Surrey road and looks onto a lake, eight acres of bluebell woods, a meadow teeming with voles, toads, mice, snakes and two fake cows, there was no trouble at all. “We’re in the middle of nowhere; we aren’t overlooked.”

What unites the Hufites is their love of their houses – for the closeness to weather that the acres of glass brings, for their airiness, for their light, for the open-planned flow of one living area into another, for the way their gardens seem to become another room. And they love the fact that they’re modern. “I don’t like old houses, ” says Virdee, who used to be in direct marketing and has a helipad on his lawn. “I like their charm, but if you look at the insulation effectiveness, the soundproofing, the lack of natural light…” As for Vickery, he glows when he talks about the famous California Case Study houses; if he’d failed to get his Huf house built, a local architect was offering to build him a single-storey glass cube on his site. “It would have been small — but stunning.”

What strikes you when speaking to the Huf owners – apart from their evangelism – is how different they are to the inscrutable, horn-rimmed-glasses-wearing, Brutalism-loving, elitist modernists of old. Families fleeing the city are to be expected, but joining them are retirees, divorcees, widowers – all enthusiastically knocking down their dark, dusty old house and starting again in style. Britain does have a grand tradition of embracing the modern, but it’s a very grand tradition. Bauhaus pioneer Walter Gropius built a house in Shipbourne, Kent, in 1937, that managed to be both lavish and entirely clad in wood. Leslie Martin, designer of the Royal Festival Hall, built the “uncompromisingly stark” Brackenfell, on the edge of Brampton in Cumbria, in 1938 for the textiles magnate Alistair Morton.

Add to that Mendelsohn and Chermayeff’s fabulous Chelsea house from 1936, and there’s a substantial tradition of British modernism, followed up in the Fifties, Sixties and Seventies by architects like Peter Foggo and John Crowther, whose Restronguet Point in Cornwall is a hymn to glass. Or Richard Rogers and Norman Foster, whose early work as partners included Creek Vean, a utilitarian Cornish house commissioned by Rogers’s mother-in-law, and funded with the sale of a Mondrian painting.

More recently we have Alain de Botton’s adventurous Living Architecture holiday homes in Suffolk and Kent, the gravity-defying Balancing Barn in particular. Yet to come is Rowan Atkinson’s modernist dream, designed by the celebrated Richard Meier as a white-glass-and-steel Oxfordshire mansion (replacing the undeniably unpretty current house) and objected to by planners because the building would be “a stark feature in contrast to the rolling rural landscape.” Huh, says Atkinson; it won’t be “weird and futuristic, but simple, graceful and elegant”. It will, he says, reinvent the architectural heritage of the country house, rather than parody it.

Atkinson may have a point. While the housing market is stagnant, demand for modern houses is surprisingly buoyant precisely because Britain’s ideal of the “country house” is changing. As Albert Hill, co-founder of the boutique estate agency The Modern House, puts it: “The new generation’s dream home is no longer a Georgian rectory.” Nor the older generation’s too. Many have turned to Modernism, inspired by the sight of the Iredales happily laying waste to their home of 40 years to make way for a Huf Haus. Modernism, it seems, is now for the masses.

In the 1970s, the architect Michael Manser described an experience typical of the problems with building trailblazing modern homes. “We were often thwarted by builders who were unfamiliar with the materials, ” he said. “Projects would drag.” Talk to Huf owners, though, and they rhapsodise about the efficiency of their experience. For Huf is a German firm that’s almost self-parodically organised. You buy a plot of land and call in Peter Huf, the company’s UK architect. He’ll design you a house to fit your plot, placing it on the best axis for the sun. It’ll be, he says, his eyes slightly messianic, “bespoke” and take in any notions you may have — bar curves, for a Huf Haus is rectilinear.

Then you’ll go to the Huf Haus HQ in Hartenfels in Germany and submit to two or three days of choosing exactly which light switch you want, which door knob, which loo fittings, the works. When everything’s decided — it took the Virdees five trips to Germany — you sign a very thick “protocol”. “It’s a very un-British thing they do, ” says Vickery. “You initial each page, detailing each room and its specifications. And you stick by it. Then it’s delivered. Exactly as specified. That’s the un-British part of it.”