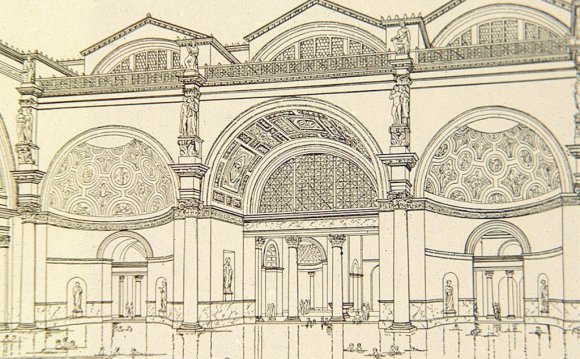 Bannister Fletcher's achievement was to create a copious reference to thousands of the major architectural works of Western Europe, in scaled drawings, photographs and summary text, thus furnishing a means of comparison - that is the key word - of building with building, style with style, period with period. This is what gives the book its uniqueness.

The book is immense yet, for the sake of avoiding an ever heavier tome, the author focused his lens on the architectural inheritance of the West.

The book is immense yet, for the sake of avoiding an ever heavier tome, the author focused his lens on the architectural inheritance of the West. Even with this limitation the book is astonishing in its range and detail. Its exhaustive and periodic approach, though on the face of it simplistic and by today's standards unsophisticated, has nevertheless served generations of architects and architectural students well.

If we turn a for a moment to the earlier editions, such as the 11th, we get a clearer picture of the author’s intentions. The "Tree of Architecture' gives a snap-shot then, in Part 1 'Historical Styles', we have the mainstream of Western Architecture, from Early Christian to the Architecture of the United States, 871 pages. Part 2, 'Non-Historical', deals with the East – just 46 pages. 'Modern English', which includes the 19th century, has a mere 20. In 1943 one does not expect much on the modern movement but the fact that the whole Victorian inheritance is despatched in less than 13 pages is remarkable. Yet this is not a failure to accord due weight but rather a deliberate decision to leave the task of selection to future generations. The period was deemed too close to the present. Modern editors do well to take note!

Now with regard to the latest edition of BF, edited by the TV celeb Dan Cruikshank . To take this venerable work and plunder its contents at will, adding whole new sections at the expense of the original, investing it with a new and inappropriate ethos, is an act of barbarism of monstrous proportions. In the words of our Royal Arbiter of Taste, placing a monstrous carbuncle .

These days there are more than enough 'coffee-table' books, with lavish photographs and dumbed-down text. There are also academic treatises a-plenty, pedalling esoteric viewpoints of an ephemeral and obsolescent kind. I regret that Bannister Fletcher's great work is now finally in danger of joining them, at the end of a long process of the progressive dilution of its contents. This is sad indeed. The book deserves more than that. Like Pevsner's great 'Buildings of England' series, it is a work which stands out of time.