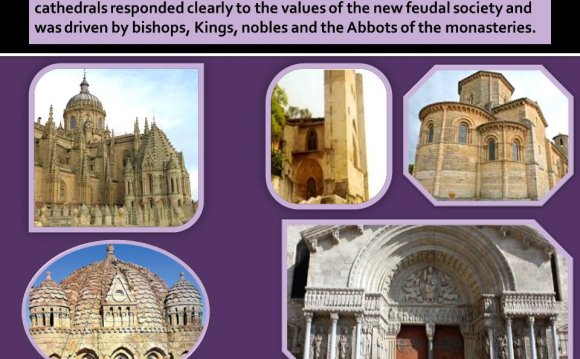 Romanesque architecture was the style of architecture from 800 AD to 1100 AD, roughly speaking. The name comes from the borrowing of the Roman style of arches and the barrel style of building, though the name came centuries later and was actually created by the Normans, not the Romans at all.

This style of architecture was one of the earliest to use entirely stone materials instead of wood because stone was the only thing that would support the heavy roofs. The style of building was also inspired by the Byzantine style which focused on sweeping religious buildings.

Over the next century, it is estimated that seven thousand churches were built in this style, though many had to be redone because the Saxon builders were still learning how to make towers and buildings that would not collapse.

The windows were still narrow though and the inside was characterized with high arches. Romanesque architecture also moved to France and Normandy where beautiful, but hard looking cathedrals were built and are still attracting tourists today. Romanesque History In Germany, Romanesque architecture took on a slightly different look with tall spires such as the ones seen in Belgium, and a more streamline appearance.

Once again, this was due to the materials that were available to the Germans, and to other countries, such as marble and massive pieces of cut stone rather than smaller stones which were used in Britain.

The buildings of the Romanesque period were meant to be huge and more often than not very awe inspiring as they were created to house religious reliquaries and allow hundreds or even thousands of pilgrims to view them. The periods of 800 to 1100 AD were characterized by heavy religious fervor, in terms of war, pilgrimages, and the showering of artifacts that held Godly significance for many people.

The onslaught of grand churches and cathedrals built in this time were meant to hold thousands of people all of whom were there to view the artifacts and listen to their religious leaders in a time of uncertainty.

However, the Romanesque buildings were not just churches and monasteries; they also encapsulated the castles that we think of when the word comes up. These castles were used as power bases for the Norman leaders and they were built to be sturdy and long lasting in times of war.

All Romanesque architecture was built to make a statement of power and wealth, as well as being defensive or offensive, and often built near a source of water. This lent itself to the brooding ruins which tourists visit today in Great Britain. Unlike more modern architecture, the architects were not the most important part of the design-instead the lord was the one who was focused upon over the course of the commission.