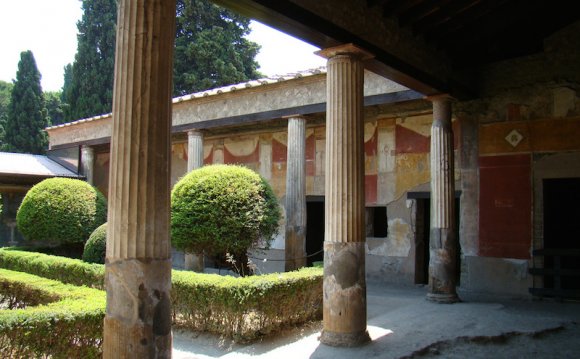 The early Roman town house was little more than a single room known as the atrium. The roof sloped inwards and downwards from all sides to a rectangular opening, beneath which was a basin, the impluvium, set into the floor to catch the rainwater. As time went on, small extra rooms were built inside the atrium against its walls, or separated off by partitions.

Town houses did not usually consist of more than one storey, though upstairs dining-rooms are sometimes referred to. Apartments above shops, however, reached by an outside staircase, were a feature of small towns. Urban congestion was a problem in Rome from early times. It has been estimated from statistics compiled at the time that in the second century AD there were 1782 houses in the city, providing accommodation for 50, 000 people, many of whom would have been household slaves. The other 1.5 million lived in tenement blocks, six or even seven storeys high. Augustus limited their height to 20 metres: Trajan lowered this to 18. Many were cheaply built on unsound foundations. Collapsed blocks were commonplace, rent irregularities were rife, and sanitation was superficial.

Model of a Roman room in a well-to-do home. (VRoma: Museum of London: Paula Chabot)

Reconstruction of a simple room based on Roman houses excavated in Newgate, London. Furniture, food, and room are replicas. Artefacts on the table - tablets and stylus, dishes, board game - are original. (VRoma: Museum of London: Barbara McManus)