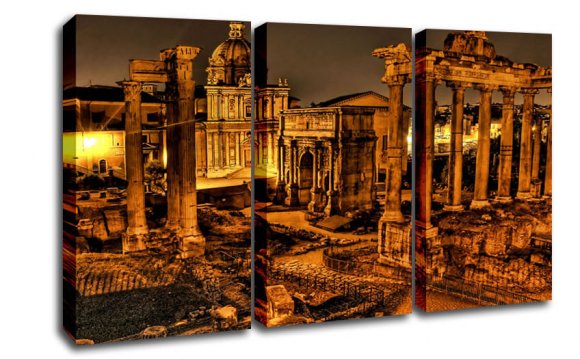 The Roman Forum Forum Romanum is the central area of Rome where much of the ancient Roman civilization developed. The Forum consists of temples, basilicas, arches, monuments, residences of kings and priests, promenades and other structures that served as the ancient city center of the Roman Republic and Empire. The Forum, rich in mythology, history, and architecture, was archaeologically unearthed in the early 20 th century and stands today as ancient ruins; some towering to 100 feet tall, others a mere paving surface used by Caesar and Augustus. The ruins of temples, judicial buildings, and honorary columns allow for an imaginative understanding of the power and wealth held by the Roman Empire.

The Roman Forum was altered and reconstructed many times over the 1, 200 years that it was the epicenter of the Roman civilization. At one time the Roman Forum was comprised of 44 structures used for residence, public speeches, or honorary columns. This report will focus on the major developments of the roman forum and briefly illustrate its current condition.

map of Tiber River and topography. source; Rome and Environs

The Roman Forum's birth as the center of the Roman Empire is a complicated story embedded in Roman mythology involving gods and goddesses, death and deceit, and ravaging flood waters. The story starts with the exile of two brothers who were the offspring of the god Mars. The children were ordered to be drowned in the Tiber River by King Amulius for fear that the children would eventually kill him. However, by the will of a powerful god, the river flooded the ancient city and making it impossible for the brother's assassins to carry out the drowning at the main channel of the river. The assassins placed the boys, Romulus and Remus, in a wooden trough along the banks of a flooded marshland near a fig tree, certain that they would be carried

she- wolf nurturing Romulus and Remus

down the Tiber River to their death. As the flood waters receded, the trough ran aground and the

boys, now stranded, were nourished by animals. A woodpecker brought bits of food and a she-wolf was found nursing the boys by a local shepherd. The shepherd adopted the two brothers and brought them to his home on the Palatine Hill. Later, Romulus killed his brother and founded the City of Rome at the Roman Forum around 750 BC.

At the time of Rome 's founding, the Roman Forum was a grassy valley/marshland between the

map of Roman Forum. note layers of building footprints and reorganization of Comitium

Palatine and Capitoline Hills. Around 600 BC, the ruling Etruscan Kings began constructing an outdoor public meeting place. The first Etruscan King began a series of large scale public works including the construction of sewers to drain the marshland. The most important of these, the Cloaca Maxima , made the area of the Roman Forum usable for the first time. The course of the stream that meandered through the central part of the Forum is still distinguishable today.

In its early development, the Forum was an open space used for speeches and gatherings. It was later divided into two parts; The Forum proper became the marketplace and the Comitium, was the area for political and judicial activity at the northwest end of the Forum. Approximately 550 B.C., the Niger Lapis and the first Regia were constructed at the northwest end of the Forum by the Roman Republic . The Niger Lapis consisted of an alter and a Rostra,

which were used by orators for public speeches. The Regia is a building used as a shrine or residence by kings or pontifex. The Temple of Saturn and The Temple of Castor and Pollux were also constructed by the Republic around 450 BC.

Colosseum, the Greatest Example of Roman Architecture and ...