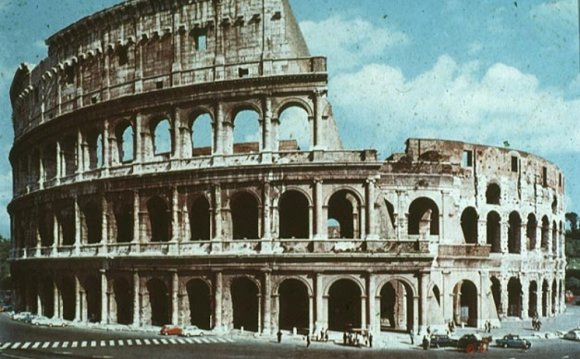 Pont du Gard (Roman Aqueduct) is one of the oldest and most remarkable Roman hydraulic works. The bridge is 48.77m high, has three levels and was built in ca. 20 BC (newer excavations, however, suggest the construction may have taken place between 40 and 60 AD). It crosses the river Gardon near Nimes (south of France).

The aqueduct originally carried water from a source at the Fontaine d'Eure near Ucetia (Uzès) to a delivery tank or castellum divisorum in Nemausus (Nîmes), from where it was distributed to fountains, baths and private homes around the city. Although the straight-line distance between the two is only about 20 km, the aqueduct takes a winding route measuring around 50 km to avoid the Garrigue hills above Nîmes. Even when you arrive on foot, entrance to this site is not free any more. The walking path from the bus stop to the visitor center conveniently passes the ticket booths that are set up to sell drive by tickets for cars. There may be ways around paying it (especially when it is a busy day in summer), but that would not be easy for a first time visitor. My 10 EUR ticket wasn’t checked anywhere further on the premises, not even at the “museum”.


The visitor center has been a relatively recent addition to the site, and is said to have improved the visiting experience. Fortunately I went there on a quiet autumn day, but the center clearly was built for receiving masses. The toilets and a relatively cheep & cheerful self-service cafeteria were OK though. I only visited the museum exhibition on my way out – there aren’t any unmissable pieces to see, but I came to know some worthwhile facts from the displays and multimedia presentations. Such as how the aquaduct fell into decay relatively quickly. It has been used for about 150 years, but the water quality deteriorated fast after the initial streams of water passed. It wasn’t good enough anymore to fill the city’s baths, and was only used in agriculture. The exhibition also states that the Roman aquaducts around Europe were built as “stone flags” – marking the territory mostly.

The aquaduct / bridge itself lies somewhat hidden in the landscape, and you’ll only see it when you’re nearly there. Its height is impressive, as well as the huge original ochre coloured stone blocks that hold the construction. You can walk next to it via the stone footbridge that was added in the 18th century. There are viewpoints on four sides (left, right, back and front), and at different heights. The funny thing with taking pictures is that you'll notice that the aquaduct is leaning a bit to one side (to make water transport possible), while you're used to a straight horizontal line at the top of your viewer.

It’s a pleasant sight, but I wasn’t as taken by it as I was with the Pontcysyllte Aqueduct. The experience of being on top, with the water running next to you, is missing here. And also I had expected more of the natural scenery around it. Maybe it is better in Spring.