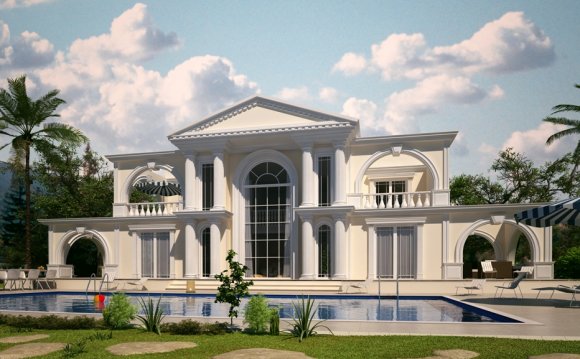 As with other aspects of ancient Roman life and Roman architecture, Roman homes, houses and Roman villas underwent a degree of evolution, particularly as the fortunes of Rome impacted wealth, society, roman technology and standards of living.

A further factor to be taken into account is the vast period of time being considered when we speak of "Roman" homes and housing. Ancient Rome had a history which lasted over a thousand years and as such it is hardly surprising that the customs, needs and dwellings of the citizens should change.

Political affairs also affected location: Rome's civil wars between Julius Caesar and Pompey at the end of the Republican period meant that it was safer for the rich and important to have their sumptuous dwellings outside Rome's city walls on the nearby hills such as the Quirinal, Viminalis or Caelius or even in the Trastevere district where there was the added advantage of land to be employed for sumptuous gardens and parks.

In the centre of town the most over-populated areas where the plebeians dwelt tended to be the lowest and generally least salubrious, probably as they used to be marshes before being drained. The Suburra was the most famous or infamous of these.

As we look at ancient Roman houses and villas we will notice that their development was influenced by very real aspects such as:

To give some quick insight: Advances in hydraulics allowed the Romans to bring piped water into their homes, this meant that there was less need for water collection basins (impluvium) within the home. Coupled with advances in construction this enabled the buiding of multi-story apartment blocks. Glass at the windows allowed larger windows to be built to allow light in whilst keeping the cold out. Availabiltiy of raw materials allowed a broad variety of decorative techniques which acted in concert with the plasticity of brick and cement walls and suspended plaster ceilings to bring great innovation of interior spaces. Access to food and primary needs meant that it was no longer necessary to have your own vegetable patch and cities could be built up more intensively.

"Fires" as a source of development in Roman architecture and Roman houses might seem like a strange element to add to the list. Rome and ancient Roman buildings were very prone to fires due to the great use of oil lamps for internal lighting and cooking fires. The wooden structures within walls, floors and ceilings did the rest, as in the great fire of Rome during the reign of Emperor Nero. These fires were occasion for relatively regular destruction of artwork and buildings and their subsequent reconstruction. A famous example of this is the Pantheon, first built in traditional style by Agrippa during Augustus' reign but rebuilt in its glorious present form by Emperor Hadrian with its record breaking dome and central "oculus" like a traditional roman house compluvium/impluvium. On far smaller scale we have the evidence of reconstructions of Roman houses in ancient Rome, there are numerous examples of excavated houses with republican style mosaics which survived catastrophe and second/third style frescos on the walls which had clearly had to be rebuilt and repainted.

We can thus see how the study of ancient Roman society allows us the deepest of insights into the factors impacting the development of housing and urbanisation.

The earliest Romans living on the Palatine hill were essentially farmers and shepherds, wearing animal skins as clothing and building their abodes of whatever construction materials were readily available. Archeological digs on the hills of Rome have brought to light a number of clues as to what these huts were like and when they were built.

Roman mythology and tradition places the founding of Rome around the 8th century BC but in fact archeological finds suggest early settlements as early as the 10th century BC.

Houses of the Roman elite: Pompeii (2/6)