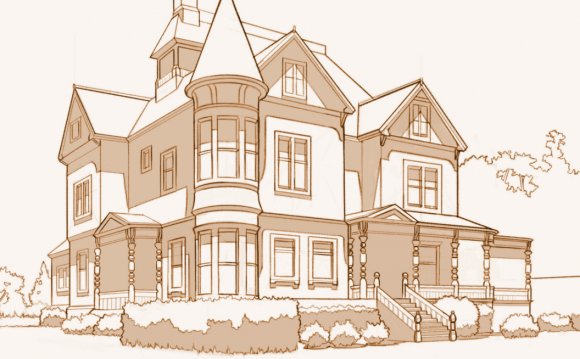 Here are some Before, During and After photos of the restoration of my home – a vernacular late Victorian style architecture in Freehold, New Jersey.

Built in 1910, only 117 years after Louis XIV was guillotined (1793) and 17 years before the Tastykake Butterscotch Krimpet (1927). Taft was president, and Fathers Day was first celebrated. It was a time when women’s dresses on rare occasion would reveal their ankles and popular songs of 1910 were “Let Me Call You Sweetheart” and “Down by the Old Mill Stream”.

It was then on October 1, 1910 when the Lane family moved into their brand new home with nothing but the future before them. Since then the seasons have passed, as have its many residents, but the house has lived on. Many secrets of the past are buried within its walls, and memories – some happy and some sad, now silently echo through its halls.

Sadly, as you will see in the photos, the house was in poor shape cosmetically since it was neglected for many years. The house just needed to be what it was designed to be. My goal was to restore the house back to its original splendor of the early 1900’s as accurately as I could. Many mistakes were made before I went back to school to study Historic Preservation.

This house is not at all special or unique in its architectural design or style. There are tons of similar vernacular style houses from the same period all over. Unfortunately almost all have been drastically updated making them indistinguishable from how they were designed to look. They just go unnoticed while the grand Victorians get the spotlight. So here is my restoration to bring the average person’s house back to life.


Before
After
Before – notice vinyl window in gable. Rusted Yankee Gutter.
After – Original diamond pane window was found in attic and reinstalled. Gable fretwork added. New copper-lined Yankee Gutters installed.
We can’t forget about the garage. An original garage is just as important as the main house. This garage built in the 1920’s still has it’s original sliding doors. I was told that during the 1940’s half of the garage was used to house chickens.

Wall to wall carpeting and many coats of paint on woodwork.
Wood was first stripped with a heat gun (use caution at home kids). This only took an afternoon. Chemical stripper was then applied (I hated that part).
Entrance Hall from a different view with stairs stripped – not sanded.
Woodwork is refinished. Find out more on Woodwork page.
Entrance Hall from a different view.
No more white walls – wood to wall contrast is softened
creating a warmer look and making the grain more visible.
Velvet Portieres divide Entrance Hall and Parlor.

Walls are faux painted in green. Frieze and ceiling are stenciled on plaster. Should have applied a wall liner first.

Ceiling light fixture was gas converted to electric. This is a desecration. If I had known this I would never have purchased it. Hopefully someday I can have it converted back. Although the original gas lines are disconnected, I would have to install a new gas line on the exterior of the plaster.

Close-up of newel post fixture is pictured at top of this page.

Before – Painted woodwork linoleum flooring
Same view – notice the poor condition of floor under the linoleum. Sadly most people would cover this floor with a new or fake wood floor.
That bad floor you saw was sanded. It was not stained because the patina from its age provided the nice amber color you see. If you look closely you can see the nail holes from the previous flooring – they add to the character.
The ceiling is stenciled. The frieze is white wall liner that was painted and stenciled – handmade wallpaper.

The wall base is factory made wallpaper by Schumacher.

Reproduction tin ceiling being installed after catastrophic water leak from modern plumbing.
Tin ceiling with 1926 fixture. The light bulbs are not correct for this fixture. They are from the 1930’s. The fixture should have had round bulbs like a tennis ball very similar to a 1960’s decorative bathroom style.
Original wood floor after sanding.
View of Parlor from Entrance Hall with wallpaper and portieres. The contrast from the previous white walls and woodwork created too much contrast and made the wood appear darker.

Wallpaper is from Schumacher. The wallpaper design was taken from fabric on a Victorian chair.

Music stand lists a genealogy of residents since October 1910.

Bathroom with circa 1955 renovations.
New bead board, sink and flooring.

Kitchen with wallpaper removed. This is the only room with sheet-rock which was installed by previous owner.
Although house was built in 1910, I remodeled it to a early 1920’s style. A 1910 kitchen was too drastic of a change for my abilities at the time. If I only knew back then what I know now.

Cabinet doors are the same as in before photo. Doors were cut out and glass was installed. Doors should have been flush mounted. Original wood floor was painted tan to match a spot found under the cabinets from circa 1940.


1931 Sears Prosperity Stove, insulated with asbestos. There is no thermostat control on this basic model. It’s something you get used to.
Refrigerator before conversion to Ice Box. Something just had to be done. It did not fit in with the room.
Panels for Ice Box doors and feet are attached.
Reproduction Ice Box hardware is added.
Its obvious the Ice Box is not original but it is not intrusive as it was before.

So do you like what I did with my refrigerator? Well now you can do the same with your refrigerator.

Click the picture above to find out how to convert your modern refrigerator into an antique icebox.

Mudroom before.
Removing shelves – surprise, there’s bead board behind it!
Bead board is a nice find, but look at the bad condition. There were two large spots. The one spot to the right (in previous photo) was mostly washed off. Couldn’t do that with the large white spot above.
This is the original bead board as in the previous photo. The white spots were “grained” with a faux finish to match the wood. The white spot is located between the hutch and the mirror. You cannot see it even up close.

Original bead board was on this wall only. New bead board (a bit thinner) was installed, stained and shellacked to match the original.

The original pantry was converted to a bathroom by the previous owner. He was a “handy-man” and it was not to code so had to be removed before I moved in.

When I removed the fake bead board, I found ghost lines for pantry shelves. I contacted residents of the house from the 1940’s who told me how it looked back then so I can have them re-constructed.


Shelves are lined up to original ghost marks.

Latches on cabinet doors were chemically tarnished to appear old.

Floor is bare unfinished wood as it was found.


A closer look at the stuff I can store.

This Octopus furnace was installed in 1942 to provide central heat. It is called an octopus because of the arm-like ducts. Ducts are insulated with asbestos but safely encapsulated in paint.

Unfortunately it was converted from coal to oil in the 1950’s, but fortunately all coal burning hardware was saved.

I actually have the original instruction manual that explains how to light the coal on fire.

Click here for my story about my antique octopus furnace.

The following is a passage expressing my belief:

“. . . Old buildings are not ours. They belong, partly to those who built them, and partly to the generations of mankind who are to follow us. The dead still have their right in them:

That which they labored for . . . we have no right to obliterate.” “What we ourselves have built, we are at liberty to throw down. But what other men gave their strength, and wealth, and life to accomplish, their right over it does not pass away with their death . . .”

by John Ruskin 1849, “The Seven Lamps of Architecture” chapter 6

Click for a suitable for framing printer friendly copy of . One homeowner told me she framed it by her front door so guests can understand her restoration work. Christmas Decorations at our Victorian House