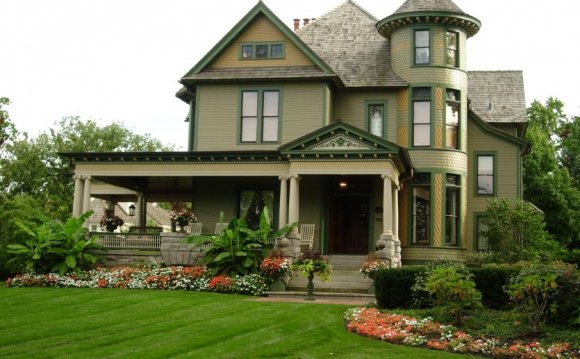 Victorian America had fashions in house design, exactly as we have fashions in clothing or hair style — except that well-to-do Victorians took the design of their homes far more seriously than we take our hair. The Victorians were highly status-conscious, and in Victorian America, nothing displayed your status like your house.

House fashions literally started at the dinner table. By our standards, most wealthy Victorians spent an incredible amount of time socializing: it was not uncommon for them to either attend or host a dinner party 2 to 5 times a week. Victorian dinners were formal and long, consisting of many courses served over as much as three hours. Afterwards, the gentlemen would retire to the game room for cigars, brandy, and billiards or cards, while the ladies would retire to the drawing room for needlepoint, possibly music, and have sherry or tea.

In short, your social circle saw your house a lot, so it was important that the house be impressive — that is, designed in the latest fashion. The house of a successful Victorian family was more than merely a home; it was a statement of their taste, wealth, and education.

The Gothic Revival was the first and most important of the many house fashions to sweep Victorian America, starting in about 1840. This style harked back to medieval castles and cathedrals, and its growth in popularity came simultaneously with romantic movements in all the arts — that is, simultaneously with the infamous Victorian taste for melodramatic music, plays, and novels. It was an odd Victorian who saw any essential difference between enjoying a romantic novel by Sir Walter Scott, set in a never-never land of knights and castles, or building an expensive house in that same style.

The Gothic Revival house is characterized by steeply pitched roofs, pointed-arch windows, elaborate vergeboard trim along roof edges, high dormers, the use of lancet windows and other Gothic details, and board and batten siding, often set vertically rather than horizontally. The greatest concentration of classic Gothic Revival houses is in New England — but the more modest "folk Victorian" houses which were built by working-class Victorians eventually became so ubiquitous that it is almost impossible to imagine an America not covered coast-to-coast with them. In midwestern farming communities in particular the style exhibited incredible durability, and (in Folk Victorian form) was still being built as late as the 1940's.