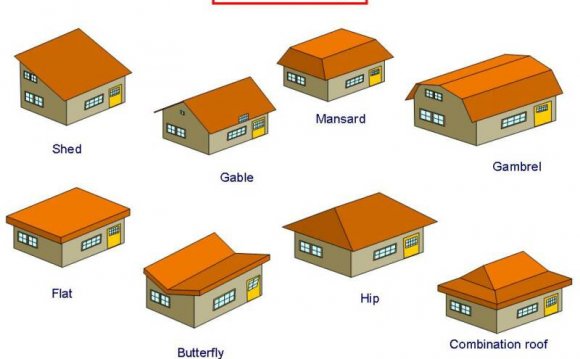 Roof shapes vary from almost flat to steeply pitched. They can be arched or domed; a single flat sheet or a complex arrangement of slopes, gables and hips; or truncated (terraced, cut) to minimize the overall height.

Flat: These are found in traditional buildings in regions with a low precipitation. Modern materials which are highly impermeable to water make possible the very large low-pitch roofs found on large commercial buildings. Although called flat they are generally gently pitched. Mono-pitched roofs (Pitched here means a roof plane rather than a slope and implies it is not a flat roof) Mono-pitched roof (shed, skillion, lean-to roof): A roof with one slope, historically attached to a taller wall. Saw-tooth: A roof comprising a mono-pitched roof or for larger buildings, series of, mono-pitched roofs with vertical surfaces glazed and pitched upward in general terms away from the equator, though other directions suit if direct sunlight is desired and where rooftop access may otherwise be impracticable. The roof tops are opaque, shielding traditionally workers and machinery from direct sunlight. This sort of roof commonly admits natural light into a factory, and is also known as "Northlight" in the northern hemisphere implying a single such plane. Pent roof (pentice, skirt roof if carried around the house): A roof appended, thus the name, to the wall of a building and by implication having further roofs or terraces above. (See gallery below) Multi-pitched roofs: Gable (ridged, dual-pitched, peaked, saddle, pack-saddle, saddleback, span roof): A simple roof design shaped like an inverted V. Cross gabled: The result of joining two or more gabled roof sections together, forming a T or L shape for the simplest forms, or any number of more complex shapes. See also roof pitch, crow-stepped, corbie stepped, stepped gable: A gable roof with its end parapet walls below extended slightly upwards and shaped to resemble steps. Half-hipped (clipped gable): A combination of a gable and a hip roof (pitched roof without changes to the walls) with the hipped part at the top and the gable section lower down. Dutch gable, gablet: A hybrid of hipped and gable with the gable (wall) at the top and hipped lower down; i.e. the opposite arrangement to the half-hipped roof. Overhanging eaves forming shelter around the building are a consequence where the gable wall is in line with the other walls of the buildings that is unless the upper gable or gables is or are recessed. Outshot or catslide: A pitched extension of a main roof similar to a lean-to but an extension of the upper roof. Bonnet roof: A reversed gambrel or Mansard roof with the lower portion at a lower pitch than the upper portion. Butterfly roof (V-roof, London roof): A V-shaped roof resembling an open book. A kink separates the roof into two parts running towards each other at an obtuse angle. Hip, hipped: A hipped roof is sloped in two pairs of directions (e.g. N-S and E-W) compared to the one pair of direction (e.g. N-S or E-W) for a gable roof. Half-hipped: A hybrid of a gable and a hipped roof. (See above.) Dutch gable, gablet: The reverse hybrid of a hipped and a gable roof. (See above.) Cross hipped: The result of joining two or more hip roof sections together, forming a T or L shape for the simplest forms, or any number of more complex shapes. Satari: A Swedish variant on the monitor roof; a double hip roof with a short vertical wall usually with small windows, popular from the 17th century on formal buildings. (Säteritak in Swedish.) Mansard (French roof): A roof with the pitch divided into a shallow slope above a steeper slope. The steep slope may be curved. An element of the Second Empire architectural style (Mansard style) in the U.S. Pyramidal Pyramid roof (pavilion roof): A hip roof on a square building. Twisted, an extreme display of craftsmanship found on some church towers in France, see gallery below. Arched roof Bow roof, rainbow, Gothic, Gothic arch, and ship's bottom roof. Historically also called a compass roof.