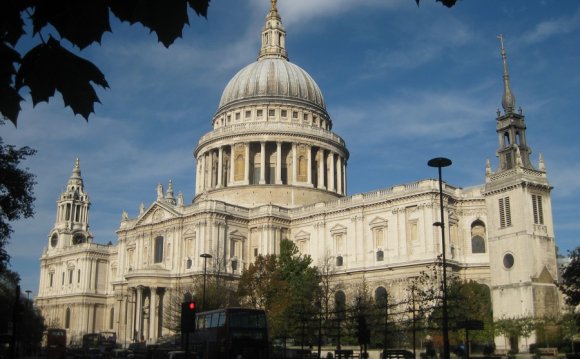 Wren did not give his attention to architecture until he was 30. No information is available to explain the development of his interest in architecture, but his training in science and mathematics and his ability in solving practical scientific problems provided him with the technical training necessary for a man who was to undertake complex architectural projects. His temperament and education, and the society in which he moved, would naturally have inclined him to wide interests.

Wren's first venture into architecture came in 1662, when he designed the Sheldonian Theatre at Oxford, a building intended for university ceremonies. Based upon the concept of a Roman theater, his ingenious interior design left the space free of supports or columns, but for the exterior he had recourse to unimaginative copying from old architectural pattern books.

Wren made only one journey out of England, a visit of several months to France in 1665 to study French Renaissance and baroque architecture. The French journey had significant influence on his work and provided him with a rich source of inspiration.

After the Great Fire of 1666, which destroyed much of London, King Charles appointed Wren a member of the commission created to supervise the reconstruction of the city. He had already drawn up a visionary plan for a new London. His design was typical of 17th-century city planning and called for a combination of radiating and grid-plan streets accented by squares and vistas, but his plan was not accepted.

Wren was given the responsibility for replacing the 87 parish churches demolished by the Great Fire. Between 1670 and 1686 he designed 51 new churches; they constitute a major part of the vast amount of work done by him and are known as the City Churches. They are uneven in quality both in design and execution, and their varied plans and famous steeples reveal Wren's empirical eclecticism and his ingenuity. The churches are essentially classical in design or baroque variations on classical themes as adapted to English taste and the requirements of Anglican worship. His work on the City Churches firmly established his position as England's leading architect; he was appointed surveyor general in 1669, a post which he held until 1718, and was knighted in 1673.

While Wren was working on the City Churches, he undertook many other projects. One of the most important was Trinity College Library at Cambridge (1676-1684), an elegantly severe building derived from the late Italian Renaissance classicism of Andrea Palladio as transmitted to England by Inigo Jones in the early 17th century. By 1670 Wren was also at work on designs for a new St. Paul's Cathedral.

St. Paul's, which took nearly 35 years to build, is Wren's masterpiece. The Great Fire had so damaged the old St. Paul's as to render it dangerous, and the authorities decided that a new cathedral was needed. In 1673 Wren presented an impressive design in the form of a large wooden model known as the Great Model. The Great Model, which still exists, shows a cathedral based on a Greek-cross plan and dominated by a massive central dome. The exterior of the building was to have curved walls and an entrance block faced with a portico of giant Corinthian columns. The design of the Great Model is Wren's expression of baroque vitality tempered by classicism and reveals the influence of French and Italian architecture as well as that of Inigo Jones.

The English were accustomed to cathedrals built on the medieval Latin-cross plan with a long nave; the Great Model design, which was much criticized, departed from this tradition and seemed to the Protestant English to be too Continental and too Catholic. In the face of such opposition, Wren prepared a new design based on the Latin cross with a dome over the crossing and a classical portico entrance. This compromise, known as the Warrant Design, was accepted in 1675, but as the building progressed Wren made many changes which reflected his increasing knowledge of French and Italian baroque architecture gained from books and engravings. The Cathedral as finished in the early 18th century is very different from the Warrant Design; the building, a synthesis of many stylistic influences, is also Wren's uniquely organic creation. With its splendid dome, impressive scale, and dramatic grandeur, St. Paul's is fundamentally a baroque building, but it is English Protestant baroque in its restraint and disciplined gravity.