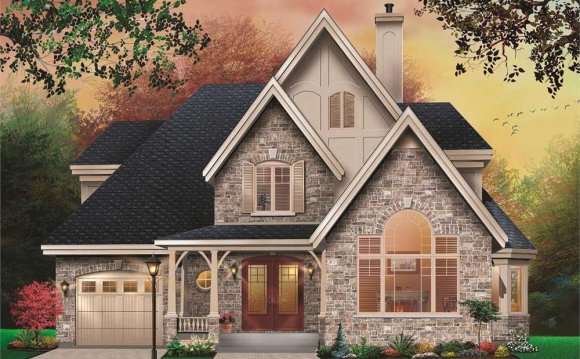 In a renovation, the old saw "measure twice, cut once" still proves sharp. For Los Angeles interior designer Norm Wogan, these are words to live by. His goal in revamping his 1926 Tudor Revival home in an Old World style was a redo that would be the house's first and its last; a Tudor that is as toothsome as it is timeless.

"I love English and European antiques and an Old World feeling, " Norm says. "When this style is done correctly the first time, it's timeless. You never have to redo the design except to update it with paint."

So instead of fighting the house's aging architecture by trying to modernize it or morph it into the popular French or Italian style, Norm embraced its English essence. He retained the exposed wood beams in the living room-a signature of Elizabethan-era architecture repeated in Tudor Revivals. Those beams connect the interior to the Tudor style of the half-timbered exterior. But he avoided a purist's heavy hand. Instead of slathering on floor-to-ceiling English paneling (dark often equals dank, at least in our minds), he took the liberty of lightening up spaces.

"The living room was a little dark, so I added two French doors. That also improved the layout, which was a little strange." The plastered walls, still in good shape, needed only a color change. "I kept the old plaster and painted it a burnished gold, and I waxed the original ceiling beams to add luster, " Norm explains. He left the original red brick fireplace simple and mounted a faux trophy (carved wood, from Holland) above it to suggest an English hunting lodge. His choice of the living room's new iron chandelier and antique English sconces also underscores the spirit, if not the letter, of Tudor style. Seating, too-camelback and tufted sofas and wing chairs-evokes an earlier English period.

The warm wall color continues to the entry and the stairwell, creating a rich, sunny first impression. "I'm not afraid to use color, " says Norm. "I like the coziness and warmth that it brings-especially when it's nice jewel tones. It's easy to use white, but I'm for branching out past the whiteness and adding some color to our houses."

For transition, he brought the burnished gold from the living room into the dining room below the chair rail. Then he softened the space by painting the upper walls teal. Puddling teal draperies and glossy teal millwork ensure that the cool hue dominates, giving the room an identity distinct from the adjoining spaces. "When I bought the house, these walls were white, " the designer notes. The dining room's revamp, in fact, really entailed nothing more than new paint.

Barley twists reappear in the master bedroom, as foot posters supporting the canopy of the tester bed. The bed, replete with a wood-paneled headboard and sconces, is quintessentially English."The entire bedroom is new, " says Norm. "It had been two weird areas with different ceiling heights. I ripped the whole thing out, vaulted the ceiling, and added French doors to overlook the pool." He also built tall cabinets into niches on either side of the bed. "I used every inch of this house for something, " assures the designer. He increased the Old World ambience with an antique French stone fireplace and an early-1900s French alabaster-and-iron chandelier. "I love my bedroom, " he enthuses. "I find it very European and romantic-so no TV!"

The other interior area to receive a total makeover was the kitchen. A beautiful old Belgian black stone floor contrasts with new pale Venetian plaster walls. "I bought the stone flooring at the same time I bought the house, knowing I would be able to use it, " recalls Norm.

An airy look prevails despite the black floor, thanks to his opening up the room with two pairs of transomed French doors. "I pushed out the bay. The doors, which are made of leaded 'restoration glass' that looks old, bring in light from two different directions, " he observes.

For cabinetry, Norm chose white-painted wood topped with a dark brown wash. These project a depth that looks right at home with antique building materials and accessories. Like the French doors, the upper cabinets feature new wavy leaded glass, which continues the light look. All hardware is from London, and the iron lantern above the breakfast table-a stunningly oversized focal point-is an English antique. Only the commercial Wolf range-completely revamped-is original to the room.

"As much as it may look like a designer's showcase, everything is durable and comfortable, " the designer reflects. "When I have friends over, they never want to leave because they're so comfortable. I use the fireplace all the time, and guests instantly feel at home. The beauty of living here is that you don't feel like you're in L.A. at all."

Who knew a Tudor could feel so good-or reign so long?

French baroque style furniture linked to that of King ...

Cambodia Buildings with the French Styles in Battambang ...