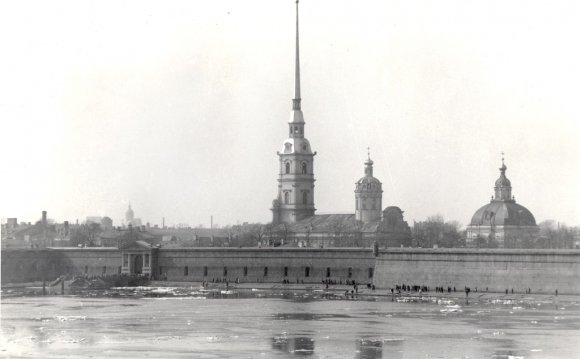 Russian architecture follows a tradition whose roots were established in the Eastern Slavic state of Kievan Rus'. After the fall of Kiev, Russian architectural history continued in the principalities of Vladimir-Suzdal, Novgorod, the succeeding states of the Tsardom of Russia, the Russian Empire, the Soviet Union, and the modern Russian Federation.

The medieval state of Kievan Rus' was the predecessor of Ukraine, Belarus and Russia and their respective cultures (including architecture). The great churches of Kievan Rus', built after the adoption of Christianity in 988, were the first examples of monumental architecture in the East Slavic region. The architectural style of the Kievan state, which quickly established itself, was strongly influenced by Byzantine architecture. Early Eastern Orthodox churches were mainly built from wood, with their simplest form known as a cell church. Major cathedrals often featured many small domes, which has led some art historians to infer how the pagan Slavic temples may have appeared.

Saint Sophia Cathedral in Novgorod (1044–52), on the other hand, expressed a new style which exerted a strong influence on Russian church architecture. Its austere thick walls, small, narrow windows, and helmeted cupolas have much in common with the Romanesque architecture of Western Europe. Further departures from the Byzantine model are evident in succeeding Novgorod cathedrals: St Nicholas' (1113), St Anthony's (1117–19), and St George's (1119). The secular architecture of Kievan Rus' has barely survived. Until the 20th century only the Golden Gates of Vladimir, despite much 18th-century restoration, could be regarded as an authentic monument of the pre-Mongol period. During the 1940s, archaeologist Nikolai Voronin discovered the well-preserved remains of Andrei Bogolyubsky's palace in Bogolyubovo (dating from 1158 to 1165).

The city of Novgorod preserved its architecture during the Mongol invasion. The first churches were commissioned by the princes; however, after the 13th century merchants, guilds and communities began to commission cathedrals. The citizens of 13th-century Novgorod were noted for their shrewdness, diligence and prosperity, expanding from the Baltic to the White Sea. The architecture in Novgorod did not begin to flourish until the turn of the 12th century. The Novgorod Sophia cathedral was modeled after the original Saint Sophia Cathedral in Kiev; it is similar in appearance but smaller, narrower and (in a development of North Russian architecture) onion-shaped domes replace cupolas. Construction was supervised by workmen from Kiev, who also imported bricks. The primary building materials were fieldstone and undressed limestone blocks. It is said that the interiors were painted in frescoes, which have now vanished. The doors were made of bronze.

The katholikon of Yuriev Monastery was commissioned in 1119 by Prince Vsevolod Mstislavovich. The architect was known as Master Peter, one of the few architects who have been recorded at this time in Russia. The exterior is characterized by narrow windows and double-recessed niches, which proceed in a rhythm across the façade; the interior walls reach a height of 20 metres (66 ft). Its pillars are closely spaced, emphasizing the height of the vaulted ceilings. The interior was covered in frescoes from the prince’s workshops, including some of the rarest Russian paintings of the time.

The Church of the Transfiguration of the Savior was a memorial to Ilya Muromets. During the Mongol invasion, Ilya was reputed to have saved the city; the church was built in his honor on Elijah Street in 1374. During this time the city-state of Novgorod established a separate district for the princes, subdividing the city into a series of streets where the church still stands. The church windows are more detailed, the niches deeper and the dome (seen in larger cathedrals) is augmented by a pitched roof.