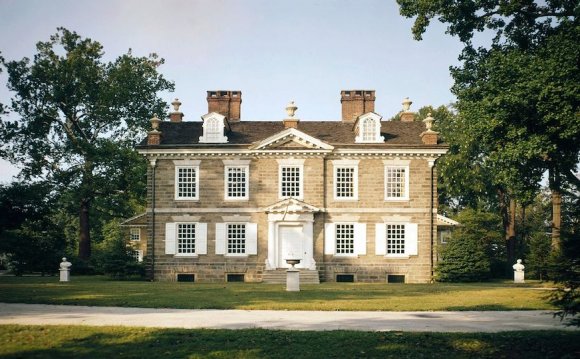 Rococo, Neoclassicism and Romanticism are three influential movements from the eighteenth century, a pluralistic century of "movements" rather than of period styles (in that respect, much like our own times). These movements are not sequential developments, but constantly overlapping reactions and counteractions.

The Rococo style: The art of the first half of the eighteenth century represents, in some respects, a continuation of the High Baroque style. It matters little whether Neumann, for example, was a Rococo or Late Baroque architect. Italy, Southern Germany, and France remained tied to the Baroque tradition in its last manifestation, the Rococo, in which the interaction of space and form in movement remained a basic element of design.

The French architect Germain Boffrand (1667-1754) was one of the most distinguished designers in Paris of private palaces and town houses (hotels) for the aristocracy. In his designs for both exteriors and interiors, an impression of elegance and refinement is given by the use of smooth, light-colored surfaces, occasionally curved, and extensive areas of glass (windows and mirrors). Exterior decoration comprises restrained patterns of horizontal grooves, variations in the curved crowns of window openings, and occasional accents of sculpture in low relief. On the interior, mirrors, wall panelling, and window openings are united by rocaille ornament: a free, curvilinear two- dimensional pattern of crisp stucco plant and shell forms, in arabesques and cartouches, open and lively in contour and occasionally asymmetrical. Furniture and painted panels pick up the rhythms of this architectural ornament. Such Rococo decoration was particularly popular in Germany, as represented here by Amalienburg.

Neoclassicism. Eighteenth-century archeological studies combined with a reaction in taste against the decorative Rococo style, and a desire to revive certain of the historical connotations of the ancient world (such as the heroic virtues of the Roman Republic) produced a Neo- Classical revival in the second half of the eighteenth century in Europe and the United States-although the brilliant villa at Chiswick was much earlier. Classicizing works of the sixteenth and seventeenth centuries (especially those of Palladio) often served as models. In general, earlier Neo-Classicism uses Roman models and emphasizes their republican associations. The Greek Doric order is revived, and we speak specifically of the Greek Revival style.

Thomas Jefferson (American, 1743-1826), an architect as well as a statesman and a scholar, was well read in the classicist theories of architecture and acquainted with the famous models of European classicism. His desire to establish a sense of cultural tradition in this new country is reflected in his architecture. For his own country house (Monticello), he modified a Palladio design to meet local practical needs, and "translated" it into local materials. He was one of the first architects to adapt Roman building types to the functional requirements of public and academic buildings.

La 17th And 18th Century Buildings Along The Fontanka ...