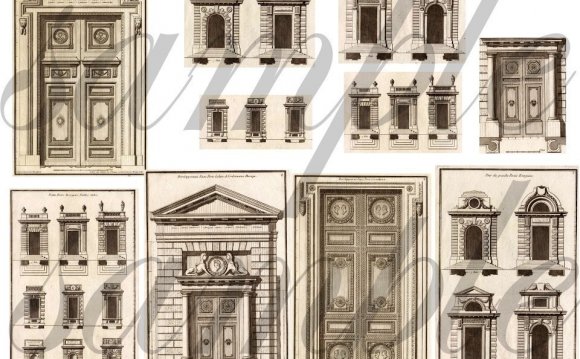 England entered the Eighteenth century looking beyond its borders. Coming out of a period of civil strife, England was now ready to participate in international affairs. One of the foremost factors in the changing English society was the increase in commerce with the Far East. Venturing to India and the Orient, Englishmen observed many exotic customs and crafts. These men would be among the first to introduce the vivid Eastern styles of architecture to the English countryside. These ornate and lavish architectural types would have a profound influence on English culture.

It is important to become familiar with the components of English eighteenth century architecture, as it is understood that the many exotic East styles were not fully adopted by the English rather just adapted. There were various styles in English architecture during the reigns of the first four members of the house of Hanover, between the accession of George I in 1714 and the death of George IV in 1830. During this period, such diversification and oscillation existed in artistic style that it is perhaps more accurate to speak of “Georgian styles.”

There were three main sub styles in the Georgian era. They include, in chronological order, Palladian, Neoclassicism, and Regency. Each type of architecture had common threads of style woven between them; however, each had a unique flare to its structure. To better understand the influence that Indian and Oriental arrangement would have over these English forms travel through the links to see English eighteenth century architecture.

Palladian style of architecture is based on the writings and buildings of the humanist and theorist, from Vicenza, Italy, Andrea Palladio (1508–80). He is questionably one of the greatest architects of the latter 16th century and certainly one of the most influential. Palladio felt that architecture should be governed by reason and by the principles of classical antiquity. Palladianism exemplifies rationality in its clarity, order, and symmetry, while it also pays respect to antiquity in its use of classical Greek and Roman forms of decorative motif. Here are a few examples of English buildings in Palladian style.

Partly as a reaction to the grandiose architecture of the later Palladian Stuarts, the Whigs, who recently gained power (1730), expressed a desire to return to a more rational and less complicated style. Still inspired by the designs of Palladio, the Whigs began a revival of architecture governed by order, symmetry, and simplicity of style. The Neoclassical designs had enormous influence our England architecture. William Benson, a Whig member of Parliament, had already built the first English Neoclassical/Palladian house of the 18th century at Wilbury House, Wiltshire, in 1710. Campbell, the first important practitioner of the new and more literal English Palladianism, built Houghton Hall in Norfolk and Mereworth Castle in Kent. The wealthy amateur architect Richard Boyle and his protégé William Kent complete the triumvirate responsible for the second phase of the style. He designed Burlington’s home, Chiswick House, as a reinterpretation of Palladio's Villa Rotonda in a simple Neoclassical version. Observe some of these fine Neoclassical English structures.

Toward the end of the eighteenth century and during the reign of George IV, a number of other styles of building became popular; chief among them was the Regency style of architecture. The major source of inspiration for Regency taste was again found in Greek and Roman antiquity, from which designers borrowed both structural and ornamental elements. Regency style, emphasizing purity of detail and structure, adhered to a stricter interpretation of antique modes than Neoclassicism. The elaboration of ornament on the flat surfaces of Regency design derived from the rich contrast of exotic wood veneers and application of metals or painting rather than extensive carving or complicated contours. This was greatly aided by the expeditions and trading with the Far East. Travel to Regency style England.

An 18th Century Stable Converted Into A Modern Coach House

18th Century style House in Belgium Gets a Contemporary ...