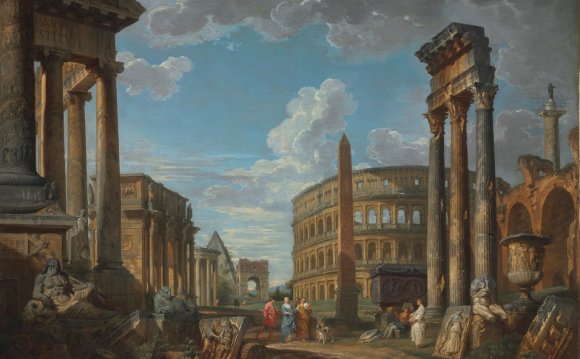 Roman roads were a vital part of the development of the Roman state, from about 500 BC through the expansion during the Roman Republic and the Roman Empire. Roman roads enabled the Romans to move armies and trade goods and to communicate.

The Roman road system spanned more than 400, 000 km of roads, including over 80, 500 km of paved roads. When Rome reached the height of its power, no fewer than 29 great military highways radiated from the city. Hills were cut through and deep ravines filled in.

At one point, the Roman Empire was divided into 113 provinces traversed by 372 great road links. In Gaul alone, no less than 21, 000 km of road are said to have been improved, and in Britain at least 4, 000 km. There were footpaths on each side of the road. The Romans became adept at constructing roads, which they called viae. They were intended for carrying material from one location to another. It was permitted to walk or pass and drive cattle, vehicles, or traffic of any description along the path. The viae differed from the many other smaller or rougher roads, bridle-paths, drifts, and tracks. To make the roads the Romans used stones, broken stones mixed with cement and sand, cement mixed with broken tiles, curving stones - so the water could drain, and on the top they used tightly packed paving stones.

The Roman road networks were important both in maintaining the stability of the empire and for its expansion. The legions made good time on them, and some are still used millennia later. In later antiquity, these roads played an important part in Roman military reverses by offering avenues of invasion to the barbarians. The laws of the Twelve Tables, dated to approximately 450 BC, specified that a road shall be 8 ft (2.45 m) wide where straight and 16 ft (4.90 m) where curved. Actual practices varied from this standard. The Tables command Romans to build roads and give wayfarers the right to pass over private land where the road is in disrepair. Building roads that would not need frequent repair therefore became an ideological objective, as well as building them as straight as possible in order to build the narrowest roads possible, and thus save on material.

Roman law defined the right to use a road as a servitus, or claim. The ius eundi ("right of going") established a claim to use an iter, or footpath, across private land; the ius agendi ("right of driving"), an actus, or carriage track. A via combined both types of servitutes, provided it was of the proper width, which was determined by an arbiter. The default width was the latitudo legitima of 8 ft (2.4 m). In these rather dry laws we can see the prevalence of the public domain over the private, which characterized the republic.

Roman law and tradition forbade the use of vehicles in urban areas, except in certain cases. Married women and government officials on business could ride. The Lex Iulia Municipalis restricted commercial carts to night-time access to the city within the walls and within a mile outside the walls.

Roman roads vary from simple corduroy roads to paved roads using deep roadbeds of tamped rubble as an underlying layer to ensure that they kept dry, as the water would flow out from between the stones and fragments of rubble, instead of becoming mud in clay soils.

Construction of a Road

The distinction between staff and line officers applied to the Roman army as well. Among the staff officers were a unit called the architecti, "chief builders", responsible for all military construction, which road-building was. These were required to be educated men. Geometry, of course, was a central requirement of their education.