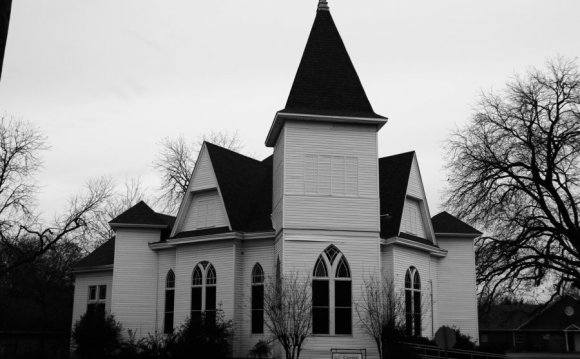 "This architecture speaks to our heritage and traditions, but it also connects to our ideas about social service, " Anderson said from his office in the complex just off the Huntsville, Ala., Square. "Beyond the obvious symbols, we believe that beauty embodies truth, and that through beauty, we get glimpses of God's eternal beauty."

The steeple draws the eye more than 150 feet into the sky, aiming at heaven. The vaulted shape of the entrances mirror the Gothic arch of the interior – a fairly graphic reference to the shape of the Virgin Mary's womb, and a reminder that those who enter do so in order to help birth the Kingdom of God on Earth.

Stained glass windows color the light of God streaming into each life through its own personality and mission, and symbols evoke the Virgin Mary through the Fleur de Lis, a stylized design of the lily that symbolizes Mary's purity, as well as through the more expected symbols of scripture, Apostles and creed.

The arrangement inside is different from what was in the congregation's first, fairly Spartan 1847 building, Anderson said. That arrangement was more similar to most Protestant churches in emphasizing the pulpit as the focal point.

But the 1859 building was designed in keeping with the Oxford movement, which was becoming more influential in the U.S. in the mid-1800s. In that plan, the altar used for the Communion takes the center spot in the area known as the sanctuary at the front of the church as the Eucharist moved to the center of Anglican theology. There are lecterns at either side of the chancel for reading scripture and for the sermon, and the baptismal font is near the entry door, reminding all who enter of their initial welcome into the church through baptism.

Over the main door into the nave of the church, the stone lintel is inscribed, "Reverence My Sanctuary." According to lore, it was that phrase that halted the advance of the Union troops during the Civil War occupation of Huntsville as they intended to use the church for their hospital and stables. According to the traditional stories, the commander saw the inscription and turned the troops down the street, where they bivouacked at the nearby Methodist Church – a stay that ended a few months later when a fire started in the basement of the church that was being used for stables.

"The commander took it as a message from God that they were not to enter, " Anderson said. "We like to think that commander was a Yankee Episcopalian who spared his Southern brothers and sisters, but that's probably just a story."

The walls of the church are built of hand-made bricks and are more than a foot thick. That sounds like they should be indestructible, but a few years ago, those walls were discovered to be crumbling, the old mortar reduced to sand. Settling over the years meant that some of the stained glass windows were cracked. Moisture retention caused the plaster walls to begin peel. And the roof needed replacing.

After more than 150 years, it was time for the building to be extensively renovated.

Members rallied behind a $4.2 million capital improvement project that re-pointed the bricks with the right kind of mortar, painstakingly restored, repaired and cleaned each window, and clad the roof in copper – a move that will protect it for the next 200 years and that won a $432, 216 matching grant from the National Park Service's Save America's Treasures program.

"People have asked me how we could justify spending that much money on the building, rather than giving it directly to missions, " Anderson said. "But we do both. This building, and our stewardship of this building, is a sign that we are in this community for the long run. We give a quarter of our offerings for missions both here and around the world, and we're committed to being here another 160 years. We are going to inspire people on this block and be a resource for the community."

The church complex sits at the center of direct mission. One of its buildings has been donated for the use of The Vine, a pastoral counseling center that offers free and sliding-scale counseling. The adult literacy program started by the church in that space has outgrown it and, while still supported by the church with both donations and volunteers, now meets at the county library. The parking lot across Greene Street comes alive each Thursday afternoon with one of the area's founding local farmer's markets.

The congregation opens the sanctuary for a free music series every year. The fellowship hall is offered to community groups, like the recent Poverty Simulation Game run by Alabama Possible for Leadership Alabama and to the congregation of nearby Temple B'nai Sholom for their congregational Passover Seder.

"We want ministry to be on site, " Anderson said. "We want people to know God's love and our welcoming of them through this structure. We want them to get the sense that they are being invited into something transcendent – into the presence of God's transcendence, magnificence and over-arching love."

Take a 360-degree panoramic spherical tour of the Church of the Nativity's sanctuary built in 1859. Click on the image and scroll around from floor to ceiling to view this historic building.