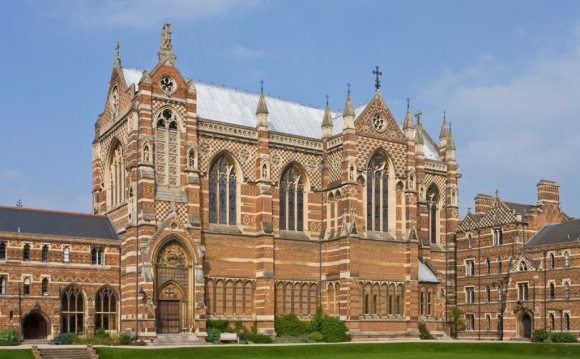 All Saints Church in Ashmont near Boston, by architects Cram and Wentworth with designer Bertram Grosvenor Goodhue, is probably the first Late Gothic Revival building in the United States. Ralph Adams Cram introduced the theory that the development of Gothic architecture in its original form was cut short by the Protestant revolution, and the style still needed to be developed to its fullest potential. In 1903 the firm of Cram and Ferguson, with whom Goodhue was a partner, won the competition for the rebuilding of West Point Academy with their scheme. Other prominent commissions were the rebuilding of St. Thomas’s Church (1906) and St. John the Divine (1907), both in New York City.

The style also flourished in commercial and collegiate structures. Bryn Mawr and Princeton University (1896), by Cope and Stewardson, and Yale (1917), by James Gamble Rogers, are among the first and most noteworthy of the “Collegiate Gothic” campuses. The Gothic style was well suited to verticality and was therefore frequently employed in tall structures. The climax of Collegiate Gothic architecture was the Cathedral of Learning (1925), the skyscraper for the University of Pittsburgh, by Charles Zeller Klauder. Another noteworthy skyscraper is the 52-story Woolworth Building (1913) in New York City, by Cass Gilbert.

The Late Gothic Style is characterized by simpler and smoother features than those of the preceding High Victorian Gothic. Polychromy, the prominent feature of High Victorian Gothic, is rare, as is the mannerist manipulation of scale. The Cathedral of the Immaculate Conception (1902) at 301 East Colfax Avenue, with its French Gothic precedent by Leon Coguard, and St. John’s Cathedral (1911) at 1313 Clarkson Street, by Tracy and Swarthwout, are both prominent examples of the Late Gothic Revival style in Denver.