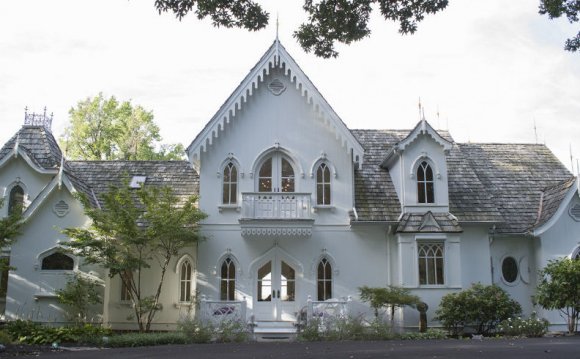 Nineteenth-century American architecture and furniture design was characterized by a parade of different styles that purported to take their inspiration from the design vocabulary of the past. In reaction to rapid urbanization, the spread of manufacturing and mechanization, the massive influx of poor immigrants, and the Civil War, wealthy members of American society embraced Romanticism, the reigning philosophy of the day, which urged a reexamination of the “simple” ways of the past in order to find happiness in the more complicated present. The many revival styles generated by this sensibility, such as Greek Revival, Gothic Revival, Egyptian Revival, Rococo Revival, Renaissance Revival, and Neo-Grec, were widely disseminated through pattern books and journals written for the cabinetmaker, builder, and general reader. Some of these revival styles were only found in furniture design, while others were used for a house’s exterior and interior design as well.

Leading design theorists of the 1840s and 1850s, such as Andrew Jackson Downing (1815–1852), wrote in his widely read Architecture of Country Houses (1850), that the style of one’s house should be emblematic of one’s values and beliefs, and reflect the way one wanted to be viewed by society. Downing collaborated on his pattern books with architect Alexander Jackson Davis. Greek Revival architecture, especially popular in the 1820s and 1830s, spoke of patriotism and American optimism at a time when the democratic system of the young country, adapted from the ancient Greek model, seemed to be flourishing. A house in the Italianate style was thought to be particularly appropriate for large suburban houses (called “villas” in the parlance of the day) owned by businessmen. Gothic Revival houses were most often built in somewhat rural settings, and were prescribed for scholarly gentlemen and members of the clergy.

The Rococo Revival style, which was limited to interiors and furniture, was thought to be elegantly French, and was the most popular style for the design of drawing rooms or parlors (traditionally feminine rooms), no matter the exterior style of the house. These drawing rooms, often painted in a color scheme of white and gold, contained elaborately carved suites of Rococo Revival furniture, usually consisting of two sofas, two armchairs, four side chairs (all upholstered in matching silk), a center table, and an étagère. Gothic Revival furniture, with it references to medieval universities and cloisters, was always considered preferable for home libraries, again regardless of the exterior of the home. With its formal high-backed chairs (1986.204), Gothic Revival furniture might also be found in the dining room. The Museum owns a Renaissance Revival parlor suite that once furnished the music room in a Second Empire house—a style, derived from the French architecture popular during the reign of Napoleon III (r. 1852–70) that was thought to indicate affluence and authority. Renaissance Revival furniture could be used in bedrooms as well as reception rooms. Egyptian Revival furniture was probably always made to function as occasional or highlight pieces—no complete suites of furniture in this colorfully exotic style are known.

After the Civil War, Americans began to look more closely at the most current high-style designs coming from Europe. While European design had always been influential, ordinary Americans began to tour Europe more often, and young American architects and designers entered the schools and ateliers there. The Philadelphia Centennial Exposition of 1876 was instrumental in bringing beautifully designed objects from all over the world to the attention of the American consumer. The exhibits from England and Japan were particularly esteemed. For Americans who wanted to be thought “artistic, ” an attribute that was highly valued in the late 1870s and 1880s, “honest” Modern Gothic oak furniture was most favored. This style was popularized by British design reformer Charles Locke Eastlake (1836–1906), in his seminal book Hints on Household Taste (first English edition 1868, first American edition 1872). After the 1870s, taste in furniture grew still more eclectic, and particular styles were no longer so rigidly prescribed for particular rooms. At this time also, home design became the purview of professionally trained architects and designers, who, at their best, created their own more innovative designs rather than depending so heavily on the styles of the past.