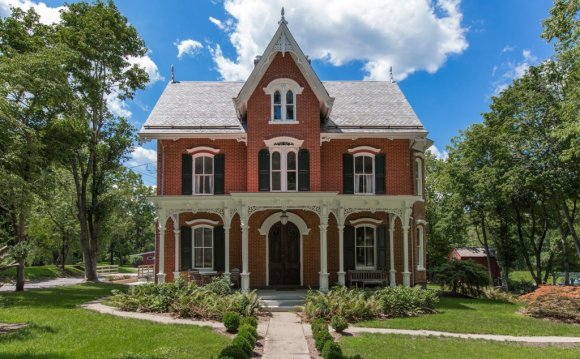 History
The Gothic Revival in its most basic incarnation is an acknowledgment of the Medieval style. It reflects, on a more “residential” level, the elements expressed on the gorgeous churches and cathedrals of the Dark Ages. The towering spires pointing to heavenward, the arched windows, the decorative stone detailing on churches of old were all reduced down into simpler and smaller details that make up the Gothic Revival.

Like most architectural styles of the time in America, the Gothic Revival was borrowed from a new trend in England. Although the style was brought to America by Andrew Jackson Davis in 1832 with the construction of the Glen Ellen residence in Baltimore, Maryland; the popularizer of the style was his friend Andrew Jackson Downing who published the house plans in some of the first pattern books in the New World. The books were the first to show three-dimensional views and full floor plans for the houses. That, combined with his tireless promotions and public speaking, gave Downing the title to most Americans as the founder of the style. Style
Gothic Revival is a style that is uniquely rural. There are few surviving examples of urban townhouses constructed in this style for several reasons. First, the elements of steeply pitched roofs and spiking gables contradicted the constraints of urban style. And secondly, the style was purveyed by it’s creators as a kind of rural farmhouse or Medieval cottage. This was a home where the architecture was just as important as the surrounding landscape. We’ve talked about another style where this connection between house and nature was pivotal and that is the American Craftsman. Both of these styles were a swing of the pendulum in the direction of desire to return to nature and have the home be one with its surroundings. Exterior colors reflected this as well, typically being earth tones such as warm reds, browns, and yellows while the trim and detailing were painted in complimentary colors. Interior woodwork was usually left natural and protected with varnish unlike the heavily made up Queen Annes that soon followed.