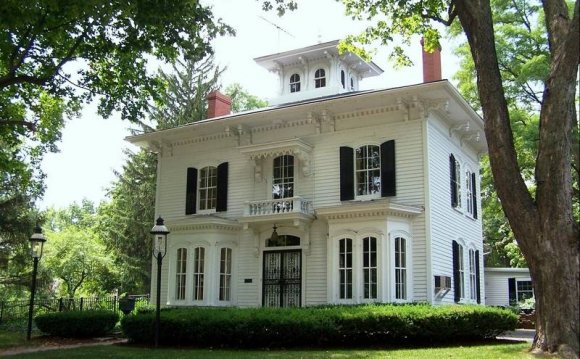 The next installment of our series of American architecture is the beloved Greek Revival. And in our honest opinion this very stately style is arguably the most wide spread trend of architecture in America to date! While the Greek Revival period in American architecture officially lasted from 1825 to 1860 there are several notable examples decades before and after that period. And today there are still hundreds of ordinary homes being built each year with some of the tell tale characteristics of the classic Greek Revival. Read on to find out if your home, new or old, owes it’s design at least partly to this beautiful style.

How it Started
After struggling through decades of birth pangs with our revolutionary separation from England and through the war of 1812 America was standing on the precipice of an unrivaled time of peace and prosperity for the first time in its history. The wars were over and America seemed ready for a change and the Greek Revival was it’s fresh start, in the architectural sense at least. Also, in 1821 Greece was beginning it’s own fight for independence from Turkey, and as the birthplace of democracy the young America immediately connected and sympathized with its Greek friends and all things Greek became immediately popular. It was so popular for a time that it was even referred to as “The National Style!”

Features
The most distinguishing feature of a Greek Revival is by far it’s unique entryway. Though not present on every house of this style it is an easy way to determine if a house is Greek Revival. Some are full height entry ways like the White House, stretching 2 or 3 stories, while others can be a more modest version pictured above or an even grander incarnation such as the New York Stock Exchange with it’s corinthian pillars and full-facade entryway (while not technically a Greek Revival the NYSE exhibits some of the features we are talking about). Other identifying features are the wide bands of trim extending all the way around the cornice area and in the gables. Dentils are also details in the trim. Dentils are the small tooth like projections underneath the trim. Doorways were also very intricate with numerous small windows and detailing surrounding the door. Also, typical are the columns supporting the entryway or porch cover. While many are square, more than half are round and either the plain-looking Doric, Ionic (pictured above), or elaborate Corinthian style. These homes are typically side gabled with a front-facing entryway gable.