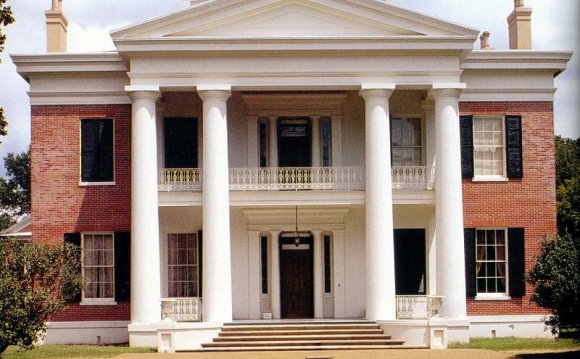 The Greek Revival captured the American spirit as no other style had done. To visit an unspoiled town that prospered in the years between 1820 and 1860 is to see democracy at work. There are grand Grecian houses with freestanding columns that frame gracious front porches (some people think of such places, in a small simplification of architectural history, as “Gone-with-the-Wind” houses). But there are also simpler dwellings for workers. Take one of these plain structures, strip it of its Greek Revival details, and what would emerge would be the Basic House, perhaps a Cape Cod in disguise, that highly adaptable eighteenth-century design. And these Greek-inspired buildings were found all over the nation, moving from the East Coast in the 1820s westward where, as late as the 1860s, Californians were still building Greek Revival houses.

The same writer-carpenter, Asher Benjamin, who helped get the word out about the Federal House, lived long enough to play a role with the Grecian style, too. His later pattern books reached builders who would never travel to American cultural centers like Boston, Philadelphia, or New York and see the major Greek Revival buildings in those cities, much less go abroad to visit the Parthenon. They didn’t have to, thanks to Benjamin’s careful prescription for Grecian proportions, window detailing, staircase construction, and much else. The Grecian mode had patriotism going for it, too. Just as the Greek Revival Style was gaining popularity in the United States in the 1820s, the Greeks themselves were fighting for independence. Perhaps that parallel to their own revolutionary history was part of the appeal to Americans of Greek architecture.

For a lot of reasons, the Grecian style appeared on streetscapes from Connecticut to California. The single most apparent characteristic of the Greek Revival House is its exterior trim work. A generation earlier, wide expanses of trim would have required much hand planing, but new planing machinery produced wide smooth boards at reasonable cost. Suddenly even people of modest means could afford homes that replicated the appearance of a Greek temple. There were pilasters or wide corner boards defining the corners of the structure. Above, a broad horizontal frieze board with molded trim separated the wall of the Grecian house from the overhanging cornice of the roof. Bold moldings added shadows and scale. The effect was to create a style that was at once uniquely American yet proudly linked to a great historical tradition.

The classic Greek Revival House has a main facade with a gable that faces the street. On top of a boxy base sits the triangular roof, supported either by columns or pilasters. The roof isn’t steeply sloped. Greek trimmings were also applied to houses of many different shapes and sizes, including the compact, single-story Basic House and the larger Classic Colonial with its two stories.