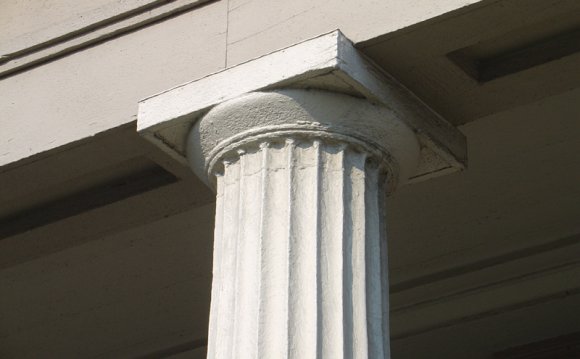 More modest than many Greek Revival homes, this home is unusual in its one and a half story construction that incorporates many features of the larger temples, including square columns, triple sash windows downstairs and a portico.

The Greek Revival Style began with public buildings in Philadelphia in 1820, and quickly became popular for residences. With its symmetrical shape, low roof lines, columns and pediments, the style mimicked Greek temples - and was thought by Americans at the time to embody the concept of Democracy. From 1830 to 1850 nearly every new public or private building incorporated some Greek Revival elements.

The style was adopted in most areas of the country, with regional differences. In warm southern climates, piazzas and porticoes were popular. Austere farmhouses with understated pilasters were built further north. The style has two variations, "temple" which incorporates most of the Greek themes with pilasters, columns, pediments, wide friezes and porticoes. The other variation is more modest, incorporating the simple, rectangular Greek building shape and few embellishments. In order to replicate the look of marble, Greek Revival homes were almost always painted white.

Defining characteristics of Greek Revival homes include a symmetrical shape, pilasters, columns, a porch entry, a window in the pediment, and plain or highly decorated cornices and friezes. Chimneys were placed as far back as possible to make the home look more like a Greek temple.

Thrifty New Englanders often simply turned the gable end of earlier Colonial style homes to the street and redesigned the front entrance in the Greek Revival style. The gable was turned into an impressive pediment, a low-pitched triangular gable, and often extended to rest on a row of columns. This was a common departure from an otherwise symmetrical layout. The front door was to one side of the gable end, and connected to a long entrance hall. Rooms were single file on the other side of the hall.

Turning the gable end toward the street, and adding a pilaster and columns turned this Federal style house into a Greek Revival. Note the entry door to one side of the windows, a typical modification in New England.

While often associated with imposing columns and porch entries, the style can range from very simple, rectangular buildings with pilasters to grand mansions with elaborate cornices and friezes. The cornice is the uppermost section of moldings along the top of a wall or just below a roof. A frieze is a horizontal band which runs above doorways and windows or below the cornice.