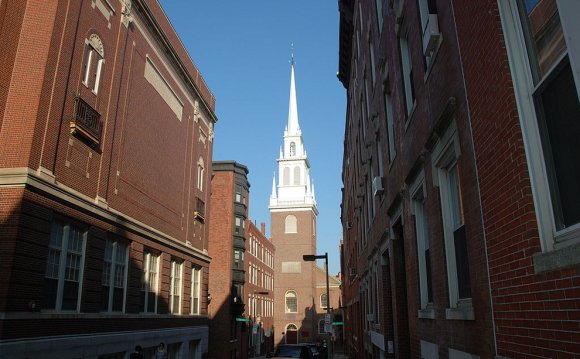 On March 5, 1770, The Boston Massacre occurred in front of the building on Devonshire Street. Lieutenant Governor Thomas Hutchinson stood on the building's balcony to speak to the people, ordering the crowd to return to their homes.

On July 18, 1776, the Declaration of Independence was proclaimed from the east side balcony to jubilant crowds by Col. Thomas Crafts (one of the Sons of Liberty). At one o'clock Col. Crafts rose in the Council Chamber and read it to the members. Then, fellow patriot Sheriff William Greenleaf attempted to read it from the balcony, but he could only muster a whisper. Col. Crafts then stood next to the sheriff and read it from the balcony in a stentorian tone. For most people, it was a festive occasion, as about two-thirds of Boston residents supported the revolution. The lion and the unicorn on top of the building were removed and burned in a bonfire in King street.

After the American Revolution, the building served as the seat of the Massachusetts state government before its move to the present Massachusetts State House in 1798.

From 1830 to 1841, the building was Boston's city hall. Previously, the city's offices had been in the County Court House. In 1830, Isaiah Rogers altered the building's interior in a Greek Revival style, most notably adding the spiral staircase that remains today. The building was damaged by fire in 1832.

During this period of time, City Hall shared the building with the Boston Post Office and several private businesses. On October 21, 1835, Mayor Theodore Lyman, Jr. gave temporary refuge to William Lloyd Garrison, the editor of the abolitionist paper The Liberator, who was being chased by a violent mob. Garrison was kept safe in the Old State House until being driven to the Leverett Street Jail, where he was protected overnight but charged with inciting a riot. In 1841, City Hall moved to the former Suffolk County Courthouse, on School Street.

After Boston's city hall left, the whole building was rented out for commercial use. This had been the case once before, in the interim between the State House period and the City Hall period. Occupants included tailors, clothing merchants, insurance agents, railroad line offices, and more. As many as fifty businesses used the building at once.

The Bostonian Society and the museum 1881–present[edit]

In 1881, in response to plans for the possible demolition of the building due to real estate potential, The Bostonian Society was formed to preserve and steward the Old State House. In 1881–1882, restorations were conducted by George A. Clough. In 1882, replicas of the lion and unicorn statues were placed atop the East side of the building, after the originals that had been burned in 1776. On the West side, the building sports a statue of an eagle, in recognition of the Old State House's connection to American history.

On July 11, 1976, as part of her Boston visit to celebrate the bicentenary of the United States of America, Queen Elizabeth II toured the Old State House with her husband. She appeared on the historic balcony and delivered an address to a large audience. The Queen said, in part,

If Paul Revere, Samuel Adams, and other patriots could have known that one day a British monarch would stand on the balcony of the Old State House, from which the Declaration of Independence was first read to the people of Boston, and be greeted in such kind and generous words . well, I think they would have been extremely surprised! But perhaps they would also have been pleased to know that eventually we came together again as free peoples and friends to defend together the very ideals for which the American Revolution was fought.

Today, tall buildings of Boston's financial district surround the Old State House. However, they do not entirely block the view of the building, and it can be seen clearly from a good distance away on the harborfront. The Old State House sits atop the State Street station on the MBTA's Blue and Orange subway lines, and the station can be entered from the basement. The building is available to be rented for evening events. However, its main function is as a museum, which is open year round, seven days a week except for some holidays.