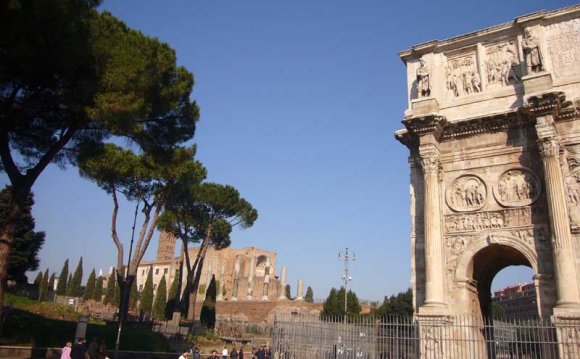 The Pantheon is one of the most famous sights in Italy. But there’s a lot more to this ancient Roman building than its postcard-worthy perfection! If you want to see it in person but in the meantime, here are 6 things you might not have known about Rome’s Pantheon (and 6 reasons why it’s one of our favorite places to visit!).

Walk into the Pantheon today, and all of the information signs say “Basilica di Santa Maria ad Martyres, ” or “Basilica of St. Mary and the Martyrs.” Huh? Isn’t this a pagan temple? Well, it was once. (More on that in a moment!). But in 609 A.D., it was turned into a church. It’s still a church today, and, yes, you can go to Mass here on Sundays!

The Pantheon is the best-preserved ancient Roman building in Rome

Largely because the Pantheon was turned into a church, it was kept remarkably well-preserved. In fact, you can still experience the building much as the ancient Romans would have. Sure, some things have changed (there’s a Christian altar here now, for example, and frescoes of saints), but the dimensions of the building, along with much of its decoration, has remained the same. At about 142 feet in diameter, the Pantheon’s dome is bigger even than the dome of St. Peter’s Basilica. It’s also completely unreinforced… there’s no rebar in there! That makes it the single largest unreinforced, concrete dome in the entire world. And, yes, it was built by the Romans in 125 A.D., not by later architects. Wow!

This isn’t the original Pantheon

You read that correctly. This Pantheon… is not the original! Don’t worry—it’s still ancient. But it just so happens to be the third version of the building. The first one was built in about 27 B.C., but burned down; the second, built in the 1st century A.D., also burned down. This, the third, was built in 125 A.D. Luckily, it survived later fires!

This, by the way, explains the strange inscription above the porch, “M·AGRIPPA·L·F·COS·TERTIVM·FECIT, ” which stands for, in English, “Marcus Agrippa, son of Lucius, consul for the third time, built this.” Agrippa was around in the 1st century B.C…. so how is that possible? It’s possible because Agrippa didn’t build the third version—he built the first. The inscription was added as a nice little nod to him, as the original founder.