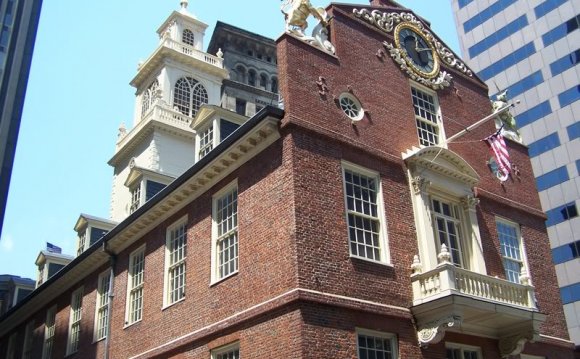 Although not a museum, the 1895 Renaissance Revival Boston Public Library is crammed with spectacular paintings, tapestries, architectural details, and sculpture - plus a fabulous 3rd floor gallery filled with John Singer Sargent murals.

Even before you enter the building, you're surrounded by magnificent sculpture and architecture - and once you're inside, you'll see something splendid everywhere you look.

But the art treasures are just the tip of the iceberg.

Many of these are displayed on a rotational basis - so wander in at any time and you may see rare medieval manuscripts, first edition folios by William Shakespeare, records from Colonial Boston, centuries-old maps, and highest-quality Old Master prints.

John Adams’ personal library is also housed here, as well as original music scores by Mozart, Prokofiev, and others. Aside from the treasures inside, Boston Public Library's two buildings are architectural gems.

Famous Boston architect Charles Follen McKim designed the older one. This is the massive, rather imposing building that you see on the west side of Copley Square.

McKim promoted his Renaissance Revival masterpiece - now called the McKim Building - as a “palace for the people” when it opened in 1895. Built from pale pink granite, many architects praise this Back Bay jewel for its perfect classical proportions.

When more space became necessary, adding onto the McKim Building presented a huge architectural challenge. Should the new building copy or blend with the McKim? If so, would it always seem less beautiful - the less-attractive wanna-be younger sister of a world-famous beauty queen? If not, how could it be different without seeming jarring and out of place? In 1972, a modern addition designed by Phillip Johnson opened. You may not even notice it from the front of the library. To see it, walk down Boylston and perhaps cross the street to view it properly.

At first, the Johnson Building, as it is called, looks very different.

But take a closer look - it's built from the same pink granite and has the same monumental scale as the McKim Building—even though its square lines, angled walls, and plain facade provide an unmistakable late 20th contrast.

You can't miss the arches - well, you can, but you shouldn't. Take a closer look, and you'll see that they sort of echo those of the McKim Building. Look some more - preferably with the McKim Building not in your line of vision, and you'll notice that the Johnson Building also has wonderful proportions. The light plays off its angles and curves in different ways throughout the day, and in different seasons.

Without the over-the-top carvings and embellishments of the McKim Building, it may never capture our attention in quite the same way - but the Johnson Building does have its own claim to beauty.

The McKim Building holds the non-circulating research and reference collection, as well as much of the incredible art.

The Boston Public Library was founded in 1848 and opened in 1854 as the first large free municipal library in the U.S.

It welcomes over 2.2 million visitors every year—researchers, art and architecture lovers, and Boston residents who simply want a quiet place to read or to find a book to check out and take home.

What You'll Find - Outside and Inside

The McKim Building looks imposing on the outside - partly because of its size. Once you go inside, you'll discover that it's actually warm and welcoming.