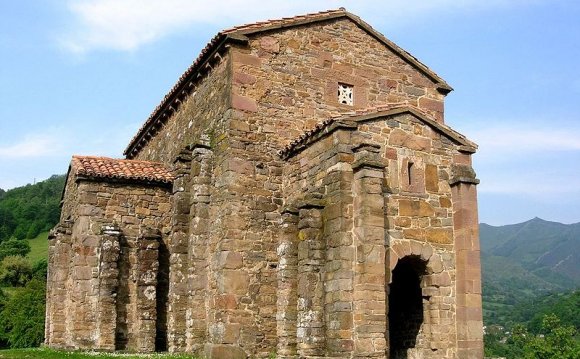 There are several ways to approach the subject of medieval architecture, including talking about the differences between two popular styles of building during this time period known as “Romanesque” and “Gothic”, but first let’s focus on what people were living in, rather than jumping to what they eventually built.

During the Early Middle Ages, everything was built with the idea of protection in mind. Do you remember the practice of manorialism? A lord’s manor wasn’t simply the house he lived in with his family, but rather, all the lands, peasants’ homes, stables, and storage buildings on his estate. Around this estate, a wall was usually built to keep the people inside safe. Much like cultures before them, the people of Europe first began building large structures from wood, but wood catches fire quite easily and doesn’t provide nearly as much protection as stone.

It was also important for kings to consider where they built castles. Was the area hard to reach? Might it be better to place it on a rocky hilltop so that anyone wanting to attack would have to climb, or to only have one way to get in or out? All of these things were considered when building during the medieval period, because for quite some time, the threat of attack from either other nobles or invaders (such as the Vikings) was a real possibility. Castles, then, weren’t simply giant stone structures sitting out in the open, waiting for someone to come along, knock on the door, and walk in. Rather, they were buildings within high walls, and contained what was very much like a small village inside the walls, along with the actual living place of the nobles, which was known as the “castle keep.” As you might imagine, buildings made of stone—especially large buildings—were difficult to keep warm.

Fireplaces were common in the bigger homes of kings and nobles, and for the peasants? They had fires too, but they did this by having a hole in the roof so that smoke could escape through the top. They certainly didn’t want all of that smoke hanging around inside, and as such, they made what was basically an early version of the chimney. (Unlike the somewhat nicer houses of nobles and kings, their homes were smaller, made of lower-quality building materials, and had very little inside, except what they needed in order to cook or sleep.)

What about Romanesque and Gothic architecture? How did that play in to building? And what were these styles, anyway? These two types of building styles (also known as architectural styles) were very often used for important buildings. Can you think of what might have been quite an important building during this period? A cathedral! The tallest building of any city of the High Middle Ages was also the one into which the most thought and work was put. Cathedrals could take a long, long time to build. Just think about carving all of that stone.