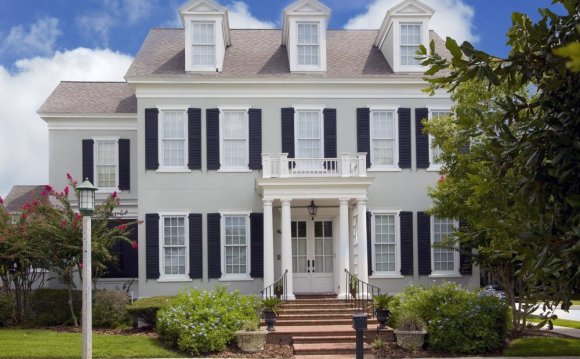 The American Foursquare or American Four Square is an American house style popular from the mid-1890s to the late 1930s. A reaction to the ornate and mass-produced elements of the Victorian and other Revival styles popular throughout the last half of the 19th century, the American Foursquare was plain, often incorporating handcrafted "honest" woodwork (unless purchased from a mail-order catalog). This style incorporates elements of the Prairie School and the Craftsman styles. It is also sometimes called Transitional Period.

The hallmarks of the style include a basically square, boxy design, two-and-one-half stories high, usually with four large, boxy rooms to a floor, a center dormer, and a large front porch with wide stairs. The boxy shape provides a maximum amount of interior room space, to use a small city lot to best advantage. Other common features included a hipped roof, arched entries between common rooms, built-in cabinetry, and Craftsman-style woodwork.

A typical design would be as follows: first floor, from front to back, on one side, the living room and dining room; while on the other side, the entry room or foyer, stairway and kitchen. Sometimes a bathroom was also included. Second floor, front to back, on one side, bedroom, bathroom and bedroom; while on the other side, bedroom, stairway and bedroom. The bedrooms had a slightly longer dimension along the front and back of the house with side-by-side closets between the bedrooms. This gave a very efficient layout, with a bedroom in each corner and a centralized bathroom and stairway. The top floor was generally just a big open space with one to four dormers. The basement generally contained a large natural convection furnace or boiler.

An advertisement for a foursquare house

Foursquare houses may be built with a variety of materials, including bricks and wood frames. Later models include built-in shelves and other amenities. Large tracts of these homes exist in older urban neighborhoods, particularly streetcar suburbs, but the design was used everywhere.