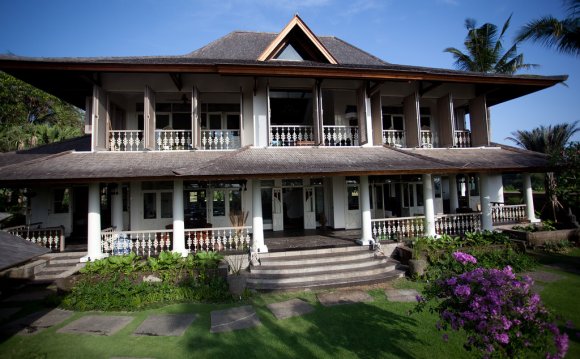 The type of homes built during colonial times varied greatly depending on the local resources, the region, and the wealth of the family.

The houses built by the first English settlers in America were small single room homes. Many of these homes were "wattle and daub" homes. They had wooden frames which were filled in with sticks. The holes were then filled in with a sticky "daub" made from clay, mud, and grass. The roof was usually a thatched roof made from dried local grasses. The floors were often dirt floors and the windows were covered with paper.

Inside the single room home was a fireplace used for cooking and to keep the house warm during the winter. The early settlers didn't have a lot of furniture. They may have had a bench to sit on, a small table, and some chests where they stored items such as clothes. The typical bed was a straw mattress on the floor.

As the colonies grew, wealthy landowners in the south built large farms called plantations. The homes on the plantations also grew in size. They had many rooms including a separate living room and dining room. They also had glass windows, multiple fireplaces, and plenty of furniture. Many of these homes were built in a style that reflected the architecture of the owner's homeland. There were German, Dutch, Spanish, and English colonial styles built in different regions of the colonies.

City homes were typically smaller than the plantation homes. Just like homes in the city today, they often didn't have the space for a large garden. However, many city homes were very nice. They had wooden floors covered with rugs and paneled walls. They had plenty of well-built furniture including chairs, couches, and large beds with feather mattresses. They often were two or three stories tall.

Although most people lived in small one or two room homes during colonial times, the wealthy and powerful were able to live in large mansions. One example of this is the Governor's Palace at Williamsburg, Virginia. It was home to the governor of Virginia for most of the 1700s. The mansion had three stories with around 10, 000 square feet. The governor had around 25 servants and slaves to help keep the house in order. A reconstruction of this impressive home can be visited today at Colonial Williamsburg.