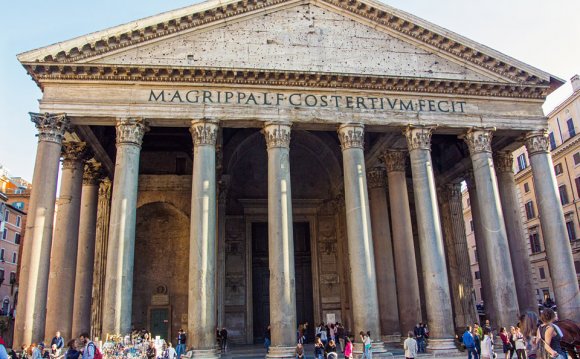 The Column of the Immaculate Conception or la Colonna della Immacolata, is a nineteenth-century monument in central Rome depicting the Blessed Virgin Mary, located in what is called Piazza Mignanelli, towards the south east extension of Piazza di Spagna. It was placed aptly in front of the offices of the Palazzo di Propaganda Fide (offices for promulgating the faith), now renamed the Congregation for the Evangelization of Peoples.

The Marian monument was designed by the architect Luigi Poletti, the actual figure atop was sculpted by Giuseppe Obici and commissioned by Ferdinand II, King of the Two Sicilies. In part, he wanted to put closure to the dispute between Naples and the Papal States that had developed in the last century, when Naples abolished the Chinea, a yearly tribute offered to the Pope as ultimate sovereign of Naples.

Since December 1953, Pontiffs have visited the monument annually and offered a bouquet of flowers at the base of the column commemorating the Feast of the Immaculate Conception.

The column was dedicated on December 8, 1857. It celebrated the recently adopted (1854) dogma of the Immaculate Conception. The dogma had been proclaimed in the papal bull Ineffabilis Deus of Pope Pius IX. The structure is a square marble base with statues of biblical figures at the corners that uphold a column of Cipollino marble of 11.8 meters. Atop the column is a bronze statue of the Virgin Mary, sculpted by Giuseppe Obici. The standard imagery of the immaculate conception is used: a virgin on a crescent, atop the world, stomping a serpent (a symbol of the original sin assigned to all women since Eve, except the Virgin Mary).

The Corinthian column itself was sculpted in ancient Rome, and was discovered in 1777 during the construction of the monastery of Santa Maria della Concezione located in this area, the site of the former Campus Martius. The original column once bore the goddess Minerva carrying a shield, now lost in history. At the base are four statues of Hebrew figures that gave portent of the virgin birth, each accompanied by a quote of a biblical verse in Latin, including David (by Adam Tadolini), Isaiah (by Salvatore Revelli), Ezekiel (by Carlo Chelli), and Moses (by Ignazio Jacometti).

The whistle of Patriarch Moses[edit]

The statue of Moses was the source of a satirical joke involving the nearby statue of Pasquino, wherein the Roman statue was said to have tried to talk to the biblical statue, only to be replied with a whistle. When the Pasquin statue asked why he could not talk some mention was made to the sibilant posture of the statue's lips. In this piazza, now thronged with young tourists out on stroll, the whistling and horns may have other sexual connotations, resulting in the joke, that sometimes also includes a sexual reference to the horns on Moses' head as well as his forked beard. Without correlation, the biblical horns of light in traditional Catholic iconography is derived from the Vulgate translation of the Bible.

The column was erected by the city fireman. An eyewitness, Juliana Forbes writes, 'It was on its side and was raised perpendicular. It was raised by some firemen who turned some capstans and so raised it. There were sixteen men to each capstan and a great many capstans which, at the sound of a bugle, were turned round and round by the firemen.' This was on December 18.

Every December 8, the day of the Feast of the Immaculate Conception, a ceremony is held here, often with the Pope in attendance, where the head of the Italian fire department presents a bouquet with the motto "Flammas domamus, donamus Corda " (English: "We stop fires, using our hearts") while a fire truck is used to place a bouquet around the right arm of the Virgin Mary statue and another bouquet decorated with SPQR label is placed on the bottom of the statue.

Building the Pantheon in Rome

The Colosseum in Rome Italy