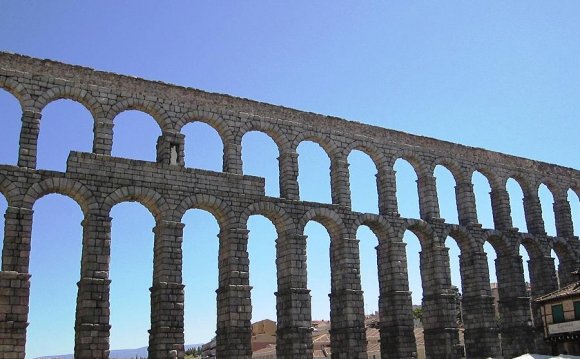 The white marble Arch of Septimius Severus (Italian: Arco di Settimio Severo) at the northwest end of the Roman Forum is a triumphal arch dedicated in AD 203 to commemorate the Parthian victories of Emperor Septimius Severus and his two sons, Caracalla and Geta, in the two campaigns against the Parthians of 194/195 and 197-199.

After the death of Septimius Severus, his sons Caracalla and Geta were initially joint emperors. Caracalla had Geta assassinated in 212; Geta's memorials were destroyed and all images or mentions of him were removed from public buildings and monuments. Accordingly, Geta's image and inscriptions referring to him were removed from the arch.

The arch was raised on a travertine base originally approached by steps from the Forum's ancient level. The central archway, spanned by a richly coffered semicircular vault, has lateral openings to each side archway, a feature copied in many Early Modern triumphal arches. The Arch is about 23 metres in height, 25 metres in width and 11.85 metres deep.

The three archways rest on piers, in front of which are detached composite columns on pedestals. Winged Victories are carved in relief in the spandrels. A staircase in the south pier leads to the top of the monument, on which were statues of the emperor and his two sons in a four-horse chariot, accompanied by soldiers.

The Arch stands close to the foot of the Capitoline Hill. A flight of steps originally led to the central opening, as one still does to the Arch of Trajan at Ancona. By the 4th century erosion had raised the level of the Forum so much that a roadway was put through the Arch for the first time. So much debris and silt eroded from the surrounding hills that the arch was embedded to the base of the columns. The damage wrought by wheeled medieval and early modern traffic can still be seen on the column bases, above the bas-reliefs of the socles.

During the Middle Ages repeated flooding of the low-lying Forum washed in so much additional sediment and debris that when Canaletto painted it in 1742, only the upper half of the Arch showed above ground. The well-preserved condition of the Arch owes a good deal to its having been incorporated into the structure of a Christian church, given 1199 by Pope Innocent III to the church of S Sergio and Bacco. Half the Arch belonged to the Cimini family, who are also attributed for the preservation of the structure (Claustrum Cimini). The stronghold included a tower placed on top of the Arch itself. When the church was refounded elsewhere, the arch remained ecclesiastical property and was not demolished for other construction.

The Arch of Septimius Severus stands near the centre of this panorama
Source: en.wikipedia.org

Ancient History: Rome If You Want To, The Arch of Titus ...

Ancient Roman Colosseum and the Arch of Constantine