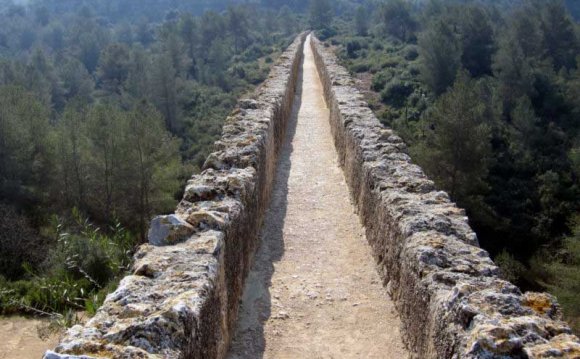 Ancient Roman ability to create arches of varying complexity was an essential element of their architecture (architect=builder of arches).

The greatest evidence we have of the triumph of the arch is its use to proclaim triumph! Hence the Roman invention of the Triumphal Arch and its repeated aesthetic echo in Amphitheaters and Aqueducts. Even the prefix "Arc or Arch" continues to imply something which is great or superior.

The variety of materials coupled with the development of better mortars and concrete allowed the Romans to construct complex vaulting. Consequently this allowed Roman buildings and structures to span large areas whilst supporting heavier structures and floors above. A utilitarian example of this is to be found in water cisterns which in hot countries had to be covered or be under ground. Vaulting and pillars allowed some of these cisterns to reach dimensions of over 150ft x 75ft x 30ft (1ft = 0.3048m).

The capability to safely span wide areas is extremely significant in terms of architecture. As well as permitting a greater number of floors it also freed Roman architects from the necessity of replicating the layout of the different floors: the upper floors could be subdivided quite differently from the ground floor which supported them below.

This is most readily seen in the crypts of some ancient churches of Romanic architecture (early medieval) where small forests of columns, frequently quarried from pre-existing buildings, supported a regular pattern of vaults above them. This use of columns and arches and vaults was applied to great effect in the construction of the basilicas which later became the Christian churches. A good example of what a basilica was like is the church of St. Paul's outside the walls, in Rome. This church is to all intents and purposes built to the plan of the ancient Roman buildings of this type which performed a function more similar to a mixture between an office block and shopping mall.

We cannot do without mentioning the Colosseum and other amphitheaters of course which in the aspect of arches are quite similar to aqueducts. The arch and vault is used in a combination of functional and aesthetic qualities. As well as rendering that romantic air of grandiosity the repeated arches allowed the architects to gain great height and strength whilst allowing mobility of vast numbers of people inside. The Colosseum not only used the arch, along its external walls, but also vaults which covered the interior passageways. The internal columns and vaults were once covered in decorative relief plaster work, which has now largely been lost, making the marks left by the supporting construction trusses plainly visible.

The late Roman architectural style came to be known as the Romanic style of the middle ages. This was a precursor of the various European styles amongst which the Gothic style was developed in northern Europe in an attempt to reach ever higher towards God. It is interesting to note how the Gothic style labored the upward structural ribs which ran from the columns into the vaults. In actual fact these ribs performed more of an aesthetic rather than structural function. I say this to make a parallel with the Romans, who likewise enjoyed using false structural features to aesthetic ends by building false vaults into their ceilings. These could be plastered and painted as in the Domus Aurea but in fact they perform no weight bearing function as such: there is merely a space between them and the beams of the floor above which at best provided improved insulation and sound proofing.