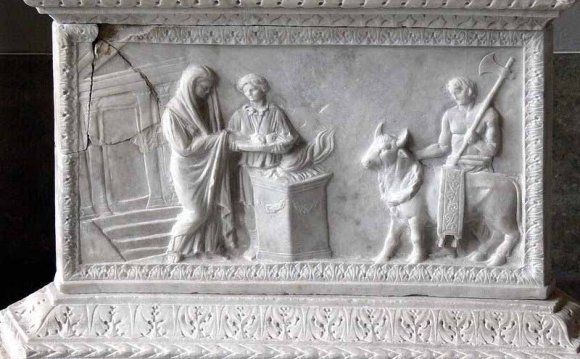 Inspired by Greek art, Roman artists often focused on gods and goddesses, in addition to philosophers, politicians, and other well-known individuals. Artists used various methods to display their work, including:

Many artists designed sculptures, which were placed all throughout the country. Sculptures decorated homes, businesses, parks, and all other areas of Rome. A typical sculpture could have portrayed any part of the subject, from as little as just a head, to as much as the entire body.

Sculptures depicting only a head were known as busts. Many Romans collected busts of famous people while also having busts made to remember family members. Homes were often decorated with the busts of relatives.

Because their gods and goddesses often represented the highest standards of beauty and appearance, many of the surviving busts give us an idea of what kind of looks were preferred in Ancient Rome.

Romans appreciated paintings as well. However, many artists painted pictures directly onto the walls of homes, allowing very few to survive today. Wealthier Romans had most walls covered with paintings. Part of the reason why Romans would have their interior walls painted is that this made rooms seem larger. A room with no windows would likely have a spacious garden scene or an expanded outdoor scene painted on the wall.

Their paintings often showed scenes from everyday life and sometimes preserved special occasions, like weddings, for example. Other scenes might have shown a family’s children playing outside. Fresco painting (painting on wet plaster) was the method used most often by Roman artists.

Because the Romans appreciated the idea of “realism, ” their art closely imitated life. The Romans wanted their art to be useful and to tell future generations about life in the past. This helps to provide us with a clear picture of life in Ancient Rome.

Some painted scenes depicted important Roman battles and other historical events, providing future generations with history lessons. To add to the realism, senators, emperors, and other important figures were painted with any physical flaws they might have had.

Inside the home, Roman pottery was also used to display works of art. Similar to the walls of the house, the pottery portrayed important people and scenes, celebrating the history of Rome or of a particular family.

Some artists created mosaics by using small pieces of glass or stone to make a larger image. These were usually very colorful and could have been placed on a wall, like normal paintings. On the other hand, some were placed into floors. Mosaics have survived better due to the materials used to make them.