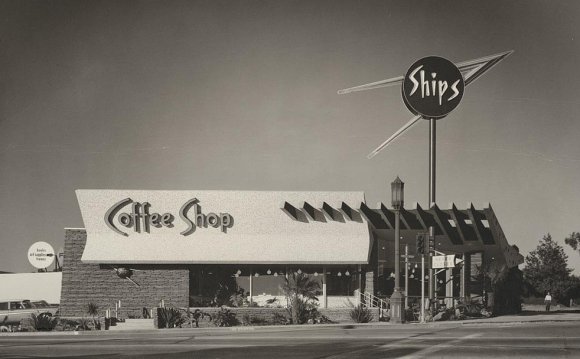 At the peak of the modern era, a meshing of car culture and the Space Age brought about the gaudy and garnished Googie architecture. The signatures Googie style lie in sweeping arches and hard angles, cantilevered roofs and bold colors, and, its most relative homage to the Space Age, the starburst. The first of the Googie style, and its namesake, was a coffee shop designed by architect John Lautner by the name of “Googies”. With its place on Sunset Boulevard in Los Angeles the new style caught the eye of many passersby who began to associate the style with the glamour of Hollywood. The spread of this movement from Southern California went most notably north and south along the shore to become a symbol of west coast futurism. The main settings for the Googie style were harbored in the roots of its founding. Coffee shops, gas stations and fast food venues used this architecture as much as a marketing campaign as for structural support. A Googie building was a symbol that a business was with the times, which in turn brought traffic and attention to its doors. The McDonalds of the 1950s and 60s famously adopted Googie style. The two fit hand in hand. The signature arches could be said to be of both houses and the fast growing company was in need of a symbol of the times and here it was found. The scene of a wing tipped cruiser parked in front of the 1950s McDonalds still holds strong as an icon of the era.

The Las Vegas of the 1950s can be said to be one of the first large scale experiments in Googie architecture. Famously the “Las Vegas” sign embodied the futuristic style. With the signature starburst and bold colors as the main features, the sign would serve as a simple roadmap for Googie architects to follow. The Googie style fit perfectly with the Las Vegas persona. Both were about both dwarfing and amazing the viewer, and in most cases, both succeeded. The bright lights of the strip seemed other worldly so what better way to convey and further this feel than with signage and architecture resembling The Jetsons. The thick cantilevering slabs seemed to defy gravity while the larger than life aesthetic arches and angles made the viewer look on with wonder. This odd, shining oasis in the desert furthered its image with equally odd style.

In its spread north the Googie style found a home in Seattle where it was largely embraced and produced the city’s arguably most famous icon, the Space Needle. With its resemblance to a flying saucer and broad, sweeping geometric gestures, the Space Needle embodied the other worldly essence of the movement. The odd notion that having a “spaceship” floating above a booming city would be possible, plausible or even aesthetically pleasing become part of the fictitious force that inspired awe at the site. The wonder of Googie architecture lay in the unknown and though this architecture has been discredited as frivolous, trivial and overall unimportant it shaped the architecture of an era.