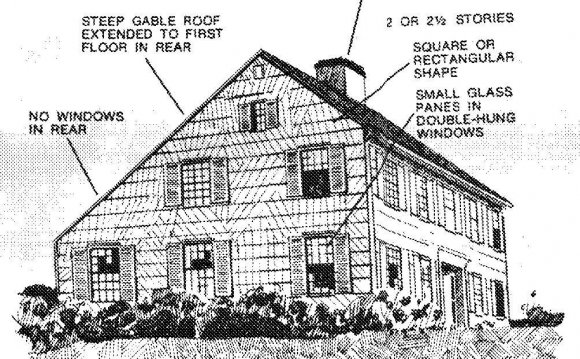 The first settlers on the eastern seaboard were from England. Although others followed particularly from France, Germany, and Scandinavia, the English prevailed in language, custom, and architecture.

The first residential buildings were Medieval in style because that is all the settlers knew. Houses in England, since at least the 13th century had been timber framed, because there was an abundance of oak. The timber frame was made from halved, or cleft, timbers rather than complete logs. The gaps between timbers were infilled with panels, saplings woven into flat mats and covered in clay, called "wattle and dob." Roofs were made of thatch. Colonist brought this method to America: a timber frame with a skin made of local materials, in New England, wood, and in Virginia, brick.

The first basic house, in the 1600s, was a one story two room (hall and parlor) house with a central chimney. This evolved into a two story, four room building. By 1700, the salt-box evolved with a shed-like addition on the back. By 1740, the shed had become a full story, or a four-on-four room house. This, with a central hall with stair case, is the basic plan outline. The standard Colonial design, with a symmetrical front - with a central door and two windows on either side, and five windows across the second floor - remains the most popular architectural plan in the United States today. It traveled west with the pioneers.

In New England, there was usually one chimney in the middle. In Virginia and the Southern colonies, there were often two chimneys - one at either end of the house - to direct the heat outwards. Today, a standard Colonial design has one chimney located conveniently to provide for the hearth in the living room and the furnace beneath it in the basement.

As settlers had began to think about aesthetics over basic shelter, and their houses were evolving from one and two room shelters, they looked to England for new ideas. England was ablaze with exciting architectural development. London had burned in 1666, and Christopher Wren was instrumental in its rebuilding. The style he and his predecessor, Indigo Jones, introduced is now called Baroque.

Wren was greatly influenced by the work of (1508-1580), unquestionably the most influential architect of the Renaissance and perhaps the first architect in the modern sense in that he devoted himself entirely to architecture and not the other arts as did Michelangelo. He built palaces, churches, public works such as bridges, and many country villas throughout Vicenza in Italy. He also published his work in I Quattro Libri dellíArchitectura, which was published and available by 1680 to those rebuilding London.

, , and Robert Adam had a tremendous influence on architecture in the thirteen colonies. They were developing architectural theories based not only on Palladio, but also on the new discovery of Roman and eventually Greek ruins. They espoused ideas of geometry, relationship, and proportions in architecture.

From 1700 to 1776, when the colonists on the eastern seaboard were establishing a civil society, the architectural life in England was vibrant, and the excitement crossed the ocean. Builders in America had access to books describing this new architecture, and they used them.

The Dutch influence on American colonial architecture can be found in New York City and surrounding areas in New Jersey, on Long Island and along the Hudson River.

In the Louisana territory, houses were built in the French style. Surviving structures can be best seen in New Orleans and in rural Louisiana along the Mississippi River. The plantation houses are timber framed structures feasturing tall and steeply pitched hipped roofs characteristic of rural French manor houses. They are adapted to the sub-tropical Louisiana in two ways: the main living area, built of heavy interlocked timbers, was built on a very tall brick foundation to protect the house from the periodical river flooding; and, the houses were usually surrounded by wide porches, or galeries, to provide refreshingly cool yet sheltered outdoor living during the summer months. Characteristic are extensive porches and no halls. They are graced with French doors from every room to the porch.