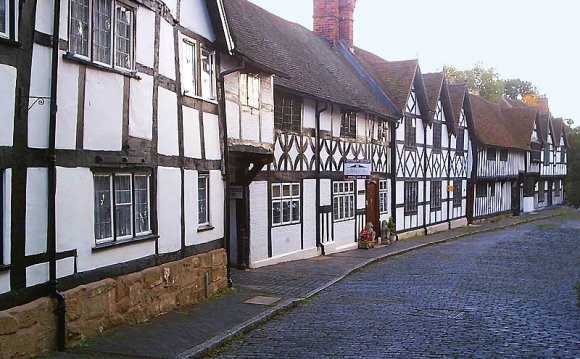 Art in the Middle ages was inseparable from religion. It was infused with spiritual symbolism and meaning. The purpose of art was to awe and inspire the viewer with the grandeur of God. It also served to symbolize what people believed. Pope Gregory the Great, he of the Gregorian chants, said, "painting can do for the illiterate what writing does for those who read." He might have added that sculpture could serve the same purpose.

Church Sculpture
The mission of the sculptor, whose work was seen almost exclusively adorning church buildings, was to educate as well as decorate. He brought Biblical tales and moral lessons to life in stone. Carvings were not just religious, however. Everywhere you look there is evidence of pre-Christian symbology in church sculpture; animals real and fanciful, scenes of everyday life, and the pagan "Green man" peering out from amongst carefully wrought leaves and vines of stone. Sculpture burst forth gloriously in the Romanesque era, with little regard for classical conventions of proportion of figures.

Chapel of St. John at the
Tower of London,
a good example of
early Romanesque style

The Romanesque Period
At the beginning of the Norman era the style of architecture that was in vogue was known as Romanesque, because it copied the pattern and proportion of the architecture of the Roman Empire. The chief characteristics of the Romanesque style were barrel vaults, round arches, thick piers, and few windows.

The easiest point to look for is the rounded arch, seen in door openings and windows. In general the Romanesque churches were heavy and solid, carrying about them an air of solemnity and gloom.

These early Norman churches were not always so stark as they seem today, however. In their heyday the church walls were hung with tapestries or painted richly. The statues of the saints were gilded (on some you can still see traces of the paint if you look closely), and the service books were inlaid with gold, jewels, and ivory. Chalices and reliquaries were encrusted with gems.

The Gothic Style
Beginning in 12th century France a new style of architecture and decoration emerged. At the time it was called simply "The French Style", but later Renaissance critics, appalled at the abandonment of classical line and proportion, derisively called it "Gothic". This was a reference to the imagined lack of culture of the barbarian tribes, including the Goths, which had ransacked Rome in the twilight of the Roman Empire.

Gothic architecture is light, spacious, and graceful. Advances in architectural technique learned from contacts with the Arab world during the Crusades led to innovations such as the pointed arch, ribbed vault, and the buttress. Heavy Romanesque piers were replaced by slender clusters of columns. Window sizes grew enormously, as did the height of vaults and spires.

Sculpture became free standing rather than being incorporated in columns. The new expanse of window space was filled with gloriously rich coloured glass. The easiest point of reference to look for in a Gothic church is the pointed arch, seen in window openings and doors. Also, the later Gothic churches had very elaborate decoration, especially the "tracery", or stonework supporting the stained glass windows.

Church Building
Churches were a point of civic pride, and towns vied to outdo each other in the glory of their churches. Money for the church was raised by the sale of indulgences, fund raising caravans of relics, parish contributions, and donations from nobles. Many times a guild would pay for a stained glass window depicting their trade. Often people would volunteer their labour to the construction, though much of the work was carried on by skilled workmen under the watchful eye of the head mason and the architect.

Church Siting and Orientation
Churches were often sited on pre-Christian sites of spiritual importance, taking advantage of peoples' existing devotion to a particular place. Worship was carried on in the same place, just with a Christian orientation. Speaking of orientation, churches are nearly always oriented so that the main altar is at the east end of the church, facing Jerusalem and, not coincidentally, the rising sun. Even if the altar end of the church is not literally in the east, that end is still referred to as the east end. In theory, then, the east end of an English church could face west.

English Architecture: Making England in the Shadow of Rome ...