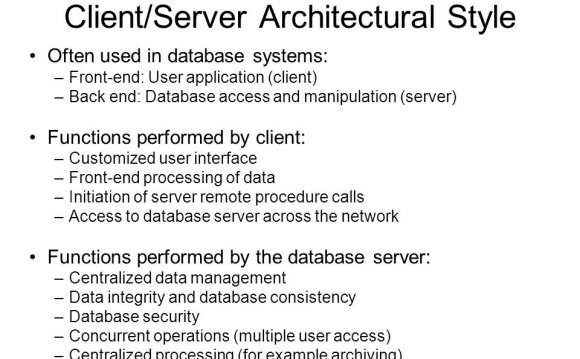 With the massive move of development to the web, developers have frequently complained of the idiosyncrasies of different browsers and demanded more standards compliance. However, the new major shift in development is towards interconnectivity of different services and mashups. We will once again feel the pain of programming against differing APIs. However, we won’t have browser vendors to point our fingers at. This will be the fault of web developers for creating web applications with proprietary communication techniques.

Much of the Ajax movement has been related to the move of user interface code to the client. The maturing of the browser platform and the availability of HTTP client capabilities in the XMLHttpRequest object, have allowed much more comprehensive client side user interface implementations. However, with these new found capabilities, it is important to understand how to build client/server applications.

So how do you decide what code should run on the client and what should the run on the server? I have mentioned the problems with user interface code running on the server. Conversely, running business logic and/or data management on the client is simply not acceptable for security reasons. Therefore, quite simply, user interface code is best run on the browser, and application/business logic and data management is best run on the server side. We can take a valuable lesson from object oriented programming to guide this model. Good OO design involves creating objects that encapsulate most of their behavior and have a minimal surface area. It should be intuitive and easy to interact with a well designed object interface. Likewise, client and server interaction should be built on a well-designed interface. Designing for a modular reusable remote interface is often called service oriented architecture (SOA); data is communicated with a defined API, rather than incoherent chunks of user interface. A high quality client/server implementation should have a simple interface between the client and server. The client side user interface should encapsulate as much of the presentation and user interaction code as possible, and the server side code should encapsulate the security, behavior rules, and data interaction. Web applications should be a cleanly divided into two basic elements, the user interface and the web service, with a strong emphasis on minimal surface area between them.