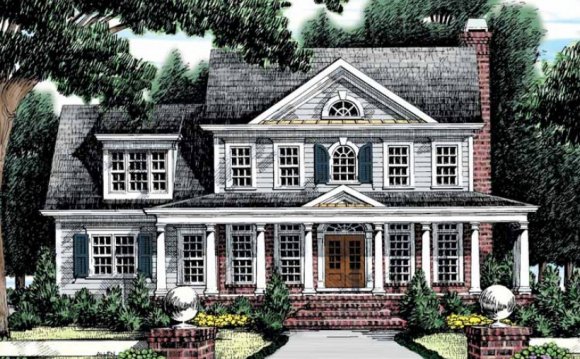 This guide is intended as an introduction to American domestic architectural styles beginning with First Period colonial architecture through the Colonial Revival architecture of the early twentieth century. The guide focuses on common stylistic trends of New England and is therefore not inclusive of all American architecture. Click on a stylistic period listed below for a brief synopsis, list of defining features, and images of examples.

Built during the first generation of settlement by English colonists, First Period architecture owes much of its appearance to building traditions from Europe. It could be argued that houses from this period are without style; they were not designed by architects. Yet several common elements mark these structures and two distinct traditions developed (northern and southern) with corresponding similarities of form and appearance. Each of these traditions took advantage of materials at hand as well as architectural features suited to their respective climates. In New England, colonists departed from traditional European wattle and daub (woven lattice of wooden strips covered with a material made with some combination of wet soil, clay, sand, animal dung, and straw), constructing wood-frame homes covered with weatherboard, clapboard, or shingles. This was a direct result of the prevalence of local timber. In addition, New England First Period homes were typically two stories tall with steeply pitched roofs, essential for shedding heavy snow loads. Central chimneys were also standard, being the most efficient way to heat these buildings during cold New England winters. Today, surviving examples have almost all been restored to their early appearance and thus retain very little original material.

Geographic Range:
First Period architecture is limited to those areas of the country settled before 1700. Connecticut and coastal regions of Massachusetts contain the highest number of First Period structures, although other examples can be found moving inland along major waterways such as the Hudson River. The dominant style for domestic construction in the United States from 1700-1780, Georgian architecture grew out of the Italian Renaissance in Europe. Andrea Palladio (1508-1580), an Italian architect, devised a set of design principles based on the Classical proportions of Roman ruins. His famous work, The Four Books of Architecture (1570), which emphasized classicism, order, and symmetry regardless of function, influenced English architects such as Inigo Jones and Christopher Wren. In turn, these principles were brought to the colonies, gaining popularity beginning around 1700 principally through architectural pattern books.

Georgian architecture gets its name from the succession of English kings named George (beginning in 1715). In the United States the style included innumerable variations on a simple English theme: a symmetrical, two-story house with center-entry façade, combined with the two-room-deep center-passage floor plan. By the end of the seventeenth century, the upper classes in the colonies began to embrace the European concept of gentility, displaying their elevated taste and station by maintaining codes of dress, speech, and behavior. This status was also aptly displayed by the orderly symmetry of Georgian architecture, a legacy that survives today.

Geographic Range:
Georgian houses are most commonly found along the eastern seaboard, where English influence was concentrated. Today, most examples survive in seacoast communities that did not continue to grow rapidly during the nineteenth century such as Portsmouth, New Hampshire, and Newport, Rhode Island.